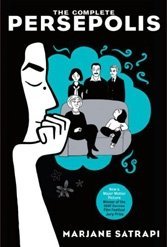 My teenage daughter received this graphic novel as a gift. I started reading it over her shoulder on the plane and was thoroughly taken in. Now an animated film of critical success, the book recounts the Iranian revolution and war with Iraq through the eyes of Satrapi, member of a historic, cultured and liberal Iranian family.

The title itself reminds us of Iran’s, glorious, imperial and complex past. Persia, which made the Greeks tremble in fear, which gave the world monotheism, beautiful art and sophisticated poetry is so much more than either the Shah or the Ayatollahs’ ideological constructs. Anyone who thinks the Middle East and its current ills can be understood through political twists that are but blips on several millennia of history should read this book. So should anyone who is tempted by facile cultural relativism or inclined to believe the personal and the political can exist independently.

Satrapi’s dramatic life illustrates her growth as an autonomous individual in a society and historical moment where such development is both subversive and a luxury. The graphics are strong and it is a testament to Satrapi’s skill that their economy of line and neo-Babylonian perspectives and compositions can convey both the horrors of the Iran-Iraq war and private sentiment with equal success. Notwithstanding the violence that Satrapi has seen first hand, her deep sense of humor is vital and redemptive.