Per un pugno di dollari (For a fist full of dollars) 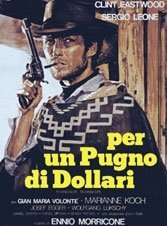 If Gary Cooper’s “High Noon” sheriff symbolized the moral loner, the hero abandoned to fate, Sergio Leone’s spaghetti Westerns spun the archetype the other way: Clint Eastwood was an amoral loner ready to leave well enough alone — unless provoked. While Cooper walked resigned into his storm, the poncho-wearing, cigar-chomping Eastwood, a deadpan avenging angel, usually liked his chances. He was Leone’s Western Samurai.

“Joe” (Eastwood) enters a forsaken Mexican town embroiled in a family feud and is quickly offended by the leading players. To save the damsel and make it right he decides to double-cross both sides. He’s laconic and remote. But oh can he can shoot.

Joe no-name is a fixer who can out-fix the best of them. The absence of surefire heroism makes the gunfights sweaty and sordid, with B-movie grittiness.

Leone almost accidentally reinvented the Western by taking the genre off its high horse. The 10-minute climax, Eastwood facing off against Ramón (the great Gian-Marie Volontè) is deservedly legendary for its back alley spirit; watching Ramón sweat is half the “fun.” Leone made two more no-name pasta flicks, but none as fresh as the first.

Ennio Morricone made his name off the guitar, whistle and flute score, which like everything else in the movie balances kitsch and quirk.