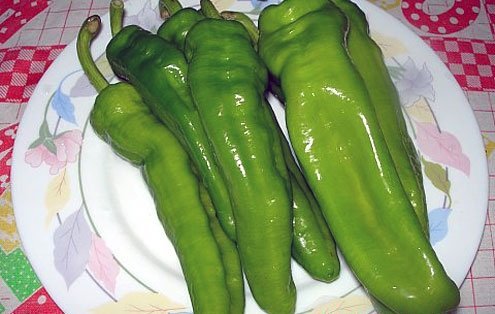 Friggitelli, also called Friarelli: A pan and a bit of oil.
J

ust after moving into my apartment in Rome a few years ago I was making a dinner salad to go with a pasta dish my roommate was preparing. Nothing about the meal stood out. Just a typical weeknight dinner. Spaghetti with canned tuna and tomatoes — practically our house pasta — and a side salad.

But I’ll never forget the look on my roommate’s face when I tossed slices of red bell pepper on the salad. It’s a look I now know very well. I’ve seen it when going for a run at noon on a hot day. When leaving the house with my hair still wet after a shower. When having a glass of milk anytime other than breakfast.

I quickly learned Italians think very differently about the pepper than most Americans.

Italians don’t eat peppers raw. Nor do they eat the skin. So my downing unpeeled, uncooked peppers represented something entirely new for my apartment-mates.

Stepping back for a moment, peppers are also new to the Old World. First brought from the Americas to Spain in the late 15th century, they quickly spread through Europe and into Asia (China is now the world’s largest producer, growing 10 times more than Mexico). From the beginning, sweet peppers were grouped in with chili peppers, and, because the latter have that pungent taste, both fell into the same category as peppercorns — as did anything with kick in Old World days. Both hot and sweet come from the same genus, Capiscum, but have no connection to the Piper nigrum, or peppercorn.

The difference between the larger, sweet variety, and their smaller punch-packing cousins is their ability to produce capsaicin — the chemical that produces the burning sensation when you eat a chili pepper. Thanks to a recessive gene that eliminates capsaicin, sweet peppers lack the bite of their relatives.

Colors can vary greatly within the same family, and with the color the flavor and nutritional value change as well. Red peppers have twice as much vitamin C as green peppers — and almost three times as much as the average orange.

And now back to today.

Italians insist that the skin of a red pepper is impossible to digest and therefore must be removed — though, like many other Italian myths about digestion, there’s scant evidence to support the notion.

I still won’t hesitate to eat a raw pepper, but last summer I learned a few ways Italians prepare their peppers that might make me think twice about just slicing and eating.

The first was in culinary school and involved making a pizza. We roasted the peppers in the oven for about 45 minutes, at which point the skin separates easily from the flesh. We then peeled them and sliced them into long, thin strips. The pizza took about 10 minutes to cook and we drizzled it with just a little bit of tomato sauce at the start. With two minutes left we took out the pie and added the strips of pepper and some fresh mozzarella di bufala.

Oven-roasting the peppers brought out their sweetness, and combined with the salty mozzarella produced a perfect sweet-savory topping.

Next came some friggitelli, small, long green peppers traditionally from Campania. These were perhaps the easiest of all, sautéed in a large pan with just a bit of oil. They’re ready when you begin seeing black burn marks and are best consumed in one bite after they’ve cooled.

My favorite, however, were roasted over an open fire. A friend from Sicily told me how his father used to make them — literally burning the outside to a crisp until every square centimeter is black, letting them cool and scraping off all the burnt skin.

Lacking an open fire in our apartment, we cooked a few directly over the burners on the stove. It made one serious mess, but the end result was worth the stovetop scrubbing.

— Heat oven to 390F (200C) and turn on broiler. Rinse peppers and place them in a large oven pan. Cook for about 10 minutes, until the top sides are completely charred, rotate and repeat until all sides are totally blackened.

— Remove from oven and allow to cool for a few minutes. Peel off charred skin and scrape off any bits that remain. Remove steams and seeds as well.

— In a blender or with a hand mixer puree peppers.

— Heat well salted pasta water. Once it boils drop in the pasta, stirring for the first 30 seconds so the pieces don’t stick together.

— In a large saucepan, sauté the onions with olive oil. Once they soften add the peppers. Simmer on medium heat until the pasta is ready, adding some pasta water if it gets too dry.

— Add pasta directly to pan with peppers and cook altogether for another 2 minutes.

— Turn off heat and add cheese. Mix well to create a creamy sauce.

— Serve immediately and sprinkle with parsley for some color.