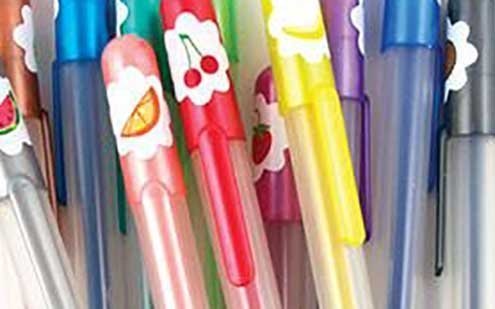 merican high school popularity often manifests itself as, “Am I hotter than Jenny from World History?” or “OMG! He plays lacrosse!” or “Flip phone or side kick?” As “how-to-be-cool” guidelines go, they’re easy enough to pick up on and follow.

Then comes Italy, a country whose concepts of popularity are grounded in the minutia of school supplies — as in pencils, pencil cases, backpacks, and so on. Today I’ve decided to focus on pens.

Before any full-blooded Americans feel left out, I know Jasmine and her Five Star binder with colored inserts obviously gets invited to more parties than Ruth and her marbled composition book.

But Italy takes these details to another level.

When I was in seventh grade (not so long ago) you had two choices. Carry the fancy brand 12-pack of scented neon pens or carry something else and publicly announce you didn’t want to be popular. The six-pack or the off-brand was social suicide.

How did I do? Well, my mother is a thrifty Midwesterner ( “You don’t need them, they won’t be cool anymore in a week…)” and my father is a serious-minded lawyer. Cool pens weren’t easy pickings around our house. Needless to say, I was not an it-girl in seventh grade.

Things started looking up a year later, when Elena, the popular girl, showed up with what today might be called “Vintages biros,” but in fact were just dead-beat pens. You know them — they’re the ones that for whatever reason camped out by the phone and you always grabbed to scribble phone messages (I’m old enough to have done that).

I’m talking about uncapped, half-finished pens from your uncle’s podiatry clinic, the kind that seemed to write one sentence before running out of ink — until being reborn for one more line the next day. Somehow, parents managed to make these lint-tipped pens popular by giving them to their impressionable children, probably just get pens and kids out of the house — and it worked. The Elena vibe — “I’m so cool I don’t even care about pens, like, I care so little about school that I don’t even know if any of these pens write…”—saw to it that homes across metropolitan Milan were emptied of these monstrosities.

Since nothing was ever thrown away at my house (thriftiness was king), I got an incredible jump on everyone else – not to mention that I’m half-American. When people noticed I could properly pronounce Harry Potter and Brad Pitt, I was in.

How could I know my brief cult status would hit that wall otherwise known as ninth grade? In ninth grade, being popular meant a higher kind of commitment, as in no pens at all. That was ninth grade dropping a mike at eighth grade.

Three words have always been used to describe me: High strung, responsible, over-prepared. The three don’t mix well with pen-less classrooms. My thought process went as follows, “What if you’re on a bus and a robber tells you at gunpoint to write a give-me-the-money note to the deaf man seated beside you?” You can’t very well tell the thief that you don’t have a pen, can you? No, the responsible and goody-two-shoes part of me just wouldn’t let me go to school without writing utensils.

Why this pen-less time? I have a theory. In Italian middle school, girls talked only to girls and boys spoke only to boys. In ninth grade, people wanted to start crossing that gender barrier — but how exactly to do that without being obvious? Not having a pen was the perfect strategy.

She, twirling hair and chewing gum: “Hey Carlo, can I borrow a pen? Thanks. And I love your Abercrombie cargo shorts.”

Being without pen was a conversation starter.

And if a friend called you out on flirting, as high schoolers are wont to do, you’d always have an elegant out: “Oh my God, Chiara, why are you being such a freak? I’m just borrowing a pen. What’s your problem? Do you like Carlo?” Suddenly the onus was on Chiara. It’s genius, really. Any nation that employs teenagers as tools of psychological warfare will be unstoppable.

Unfortunately, while the borrow-your-pen method launched many of my classmates into popularity, it left me nameless and stocked with pens. I couldn’t betray my innate need to be prepared for popularity so I didn’t become popular.

But there’s a plot twist. While I always had school supplies, which reinforced the image of a good little student, I eventually left Italy for boarding school in America. Why is this worth mentioning? Well, because in Italy, being sent to colleggio (Italian for boarding school) meant you were guilty of criminal behavior (maybe you tried to rob a deaf person on a bus).

Most just couldn’t accept that I actually chose to go to boarding school, never mind that I liked it. I’m sure they’ve thought twice about that strange and dangerous girl they went to high school with, the one that hid behind her (fully-lined) pencil case.