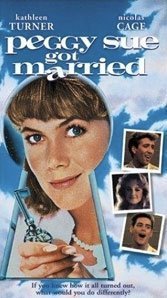 Making an unabashedly nostalgic film about the sway of memory lane would seem like a recipe for sentimental disaster. Yet Francis Ford Coppola, in a moment of simple grace, managed to sidestep all that, as well as the pitfalls of time-travel clichés, in what is his most endearing film and also among the sweetest fantasy parables of the late 20th-century.

There’s no trickery involved here. Peggy Sue (Kathleen Turner), a mother of two on the verge of divorce from her high school sweetheart Charlie (Nicholas Cage), attends a 20-year California high school reunion and faints. Next thing she knows she back at Buchanan High in 1960. But the dream travel doesn’t affect her sensibility: she knows what’s happened, which makes her view of all those around her, including husband-to-be Charlie, all the more captivating. She doesn’t want to change the past so much as graze up against it with wonderment, already aware of what’s gone forever and what cannot change. The journey is both comic and melancholy but never heavy-handed, propelled by Turner, who somehow manages to merge adult exasperation with revived teenaged wonder, conveying both with wide-eyed dexterity.

Her Peggy Sue is remarkable, as is Cage playing teenaged Charlie. These cascades of smart fantasy are made all the more believable by an exceptional John Barry score, whose gentle notes suggest what it might be like to live in the once-upon-a-time, the Oz of memories Coppola so earnestly charms. For young Helen Hunt, Joan Allen, Jim Carrey and teenaged Sophia Coppola, the film was a career lucky charm, which further reflects its magic.