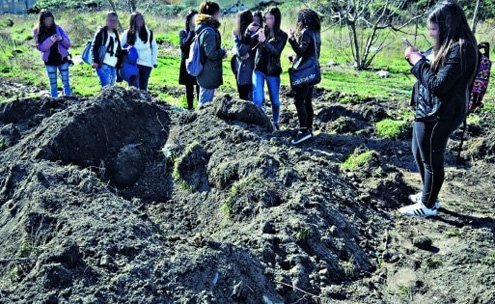 Students around the ditch where Vincenzo Amendola was found, shot twice in the head.
I

n early February a jobless 18-year-old named Vincenzo Amendola disappeared from his east Naples housing complex. Two weeks later police found his body in a nearby ditch. He’d been shot twice in the head. Naples is awash in organized crime and such murders usually get short shrift. But the Amendola story took an unsettling turn.

Two schools were near the ditch where Amendola was found. When word leaked out that police had removed a body, backpack-wearing female students swarmed the crime scene. They photographed the ditch and then posed atop it — all this in the presence of a local news photographer. The result ended up online.

A minor firestorm followed, most of it focused on the DNA of a new kind of callousness. “From an adult point of view,” said Gianluca Guida, warden of a nearby juvenile prison, “a crime scene represents a place where someone was shot and killed. We see it and maybe feel indignant, or moved, or just pay respects to someone who’s gone. For this teen generation,” he continued, “the only way of making contact with reality is through ‘media.’ A photo is how you take control of a place or an event.”

Marco Rossi-Doria, who has spent a lifetime helping Naples’ downtrodden youth, was craftier. Life’s playing field had been leveled, he said. “Any given thing is on par with any another. It can be a kiss by the sea. The goal you score in a pickup game. Your friend’s face while she’s laughing at you. A ditch where there was a body of a murdered kid. Something happens, it doesn’t matter if it’s nice or awful or stupid, or whether it’s in the neighborhood, in class, in your personal life, in the city, and the first thing you do is put it in your phone. Immediately. Everything’s on the same wavelength for the time it takes to snap the shots. After which you save them, share them, push them down the line to others… That changes only when what’s happening is about you and only you. Then maybe you’ll think twice about. You’ll be sad or glad. It becomes real.”

Missing from this digital protocol, he pointed out, was morality. Without morality, the idea of a level playing field, while admirable in democratic terms — you do what you feel like doing because you can — was also civilly and humanly reprehensible, a paradox that is becoming unstoppable.

For centuries, public executions were conducted in a carnival-like atmosphere, allowing people to gather and chatter. The brutal object lesson of the killing was offset by social pleasantries and heckling voyeurism. Not until the imposition of enlightened sensibilities in the 18th-century was human annihilation scorned as barbaric and deprived of its entertainment value. Conscience was installed as a civic necessity.

Nazi Germany bypassed these moral revisions by giving its extermination policy an ethnic justification and carrying out genocide in a way so practiced as to diminish if not suspend empathy. Horror and guilt came later, when the totality of the act settled in.

The Smartphone generation has similar recourse to suspension. Bearing witness generates the adrenalin necessary to retard or cancel out empathy. Impulse becomes its own reward, prizing opportunism and making all else banal.

Writing about literature, T.S. Eliot considered the act of suspending disbelief essential to any kind of interested reading. He recommended shackling skepticism, outrage and shock. Briefly shelve your doubts, he said. Fiction demands it.

But what happens when the disbelieving or shelving process usually applied to literature escapes its stockade and contaminates all that is real and really seen, in the way it did when public executions were common?

The answer is bearing witness as an amoral, instinctual act — animal peeing of sorts, with “present-ness” displacing any recognition of the awful. This is not highway crash rubbernecking (“Poor bastard. I’m glad it’s not me…”) or overlooking crimes as they’re being committed to dodge involvement. Both those acts recognize their own wrongness. Smartphone “seeing” goes the other way. It severs the moral umbilical chord that links what is being seen or done to the brain’s awareness of (and willingness to process) the difference between right and wrong.

In this way the Smartphone rite of needing to absorb and “own” any given moment comes to mimic the marking mechanism an animal uses when it soils a tree. This is its proof of life, its odor-driven identity. In human terms, however, it is retrograde behavior that precedes ethical cognizance of damage done, of consequence. Excuses and rationalizations aside, it is part of a pre-civil and pre-moral impulse propelled by instinct and situated outside responsibility. Any sense of the malign is exiled unless, as Rossi-Doria says, “what’s happening is about you and only you.”

It is a disturbing but now ordinary trait best incarnated by Joseph Conrad’s character Kurtz in “Heart of Darkness,” an enlightened man who while complicit in murder and degradation remains numb to his own vileness until he finally gets a whiff of his stench, and speaks two memorable lines: “The horror. The horror.”