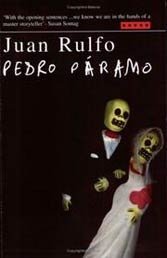 By Juan Rulfo, translated from the Spanish by Margaret Sayers Peden

“Some villages have the smell of misfortune,” says a rueful elder in Rulfo’s slender but incomparable fable about the plight of dead but ever-questing souls. Such a village is Comala, once controlled by a greedy landlord Pedro Páramo, kingpin of the Media Luna estate, and his womanizing bastard son Miguel, the two portrayed as the locomotives of local evil (páramo means moor or wasteland)

Rulfo gets to now-abandoned Comala by way of a man following the wish of his dying mother that he visit the town in search of Pedro to demand he receive what’s owed to him (she was once one of his many mistresses). But once there, he is waylaid by a cast of garrulous ghosts, muddy essences whose endless task it is to revive the town’s anecdotal history, which include tales of lust, loyalty, murder, faith, greed, betrayal, rape, and the Mexican Revolution — a theme dear to Rulfo’s heart.

The pained and suspended speakers share an unrequited desire to put an end to the remembering and stay buried once and for all. But purgatory exists to refuse them so that their eternity is an endless spool of gossip in which they’re forced to revisit a multitude of sins. Constantly shifting tenses, Rulfo disarms the passage of time the way a predatory fish stuns its prey with paralyzing poison, helpless to react as it’s eaten alive. As a result, the fable is not so much an exercise in magical realism than an act of pure conjuring in which only death, stung, brings the memory of life to life (Comala, says one ghost, “is the place where I grew thin from dreaming…”)

Mexican writer and photographer Rulfo (1917-1986), a contemporary of Jorge-Luis Borges, was a fundamental inspiration to Gabriel Garcia Marquez, who said Pedro Páramo helped inspire “One Hundred Years of Solitude.” Rulfo’s passion for photography may also account for his gift for characters that have the menacing outline of negatives.