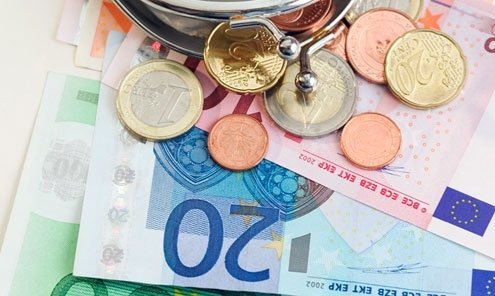 Very few of the people I know in Spoleto take home more than €1,000 at the end of the month.
O

ne of the defining differences between Americans and English people always used to be that one group was happy to talk about money and the other most certainly was not. The Americans I met as I was growing up in England were pretty up front about how much they were earning, how much their house cost and other pecuniary nuggets of information that English people would have rather walked naked through the streets than consider revealing in public.

And English people certainly didn’t go in for any form of haggling. Asking for discounts or even querying bills in a restaurant were definitely un-English forms of behavior. Not that they didn’t care about money — just that they preferred not to discuss an issue that was generally considered to be vulgar. It’s a bit like the classic scenario at the English dinner table, when there is just one roast potato left in the bowl. No one will take it, because it is the last one, but if the lights go out, you can bet your bottom dollar that it will be gone in a flash.

Well, either more travel or, I suspect, the global recession seems to be putting paid to such niceties. English people still tend not to talk about their salaries, but that has less to do with not wanting to lower the tone of the conversation, and more with wanting to keep such sensitive intelligence to themselves. If they are city bankers, they are likely to get lynched when they disclose how many bonuses they are raking in, and if they have been forced to take a pay cut, or worse, lost their job, they certainly don’t want the neighbors to know.

Haggling, on the other hand, appears to have taken over from foxhunting as the English national sport. Holidaymakers who contact me to rent the house we let in the Umbrian hills regularly ask for a discount these days, in the nicest possible way, of course. It’s easier saying things that don’t come naturally when you can use the wonderfully impersonal form of email and no one can witness you squirm, but it is crystal clear that most English people are still not very good at asking for a bargain. They use all sorts of formulae to sugar the bitter pill — we are on a tight budget; would you be so kind as to give us a last-minute discount? (this in February, for a booking in mid-August) or, more bluntly, what is your best offer? I usually tell them to get knotted, in the nicest possible way, of course.

Italians, on the other hand, tend to have rather more dignity when it comes to money, in spite of their reputation abroad as a nation of rogues out to swindle the hapless foreigner. I find it hard to imagine any Italian waiter rounding on a client to demand a tip — as an aggressive young waitress did to our family in Santa Monica last summer (having failed to notice that it was half-hidden under the plate). And try accusing an Italian taxi driver of cheating you on the fare and, guilty or not, the chances are he will make a big show of not wanting any money at all, just to prove how much he considers such pettiness to be beneath him.

In Italy, fare bella figura — putting on a good front — is a concept that it is impossible to over-estimate. You may be down to your last farthing, but no one else must know about it. A friend who runs a restaurant just outside Spoleto tells me that Italian families still come out to lunch and dinner, almost as much as before.

But whereas they would once have ordered an antipasto, first course, meat and dessert, they now feign not to be very hungry and just go for one dish. How Italians survive at all is a something of a mystery given the shockingly low salaries they receive. I am English, so of course I am not about to reveal what I earn, but I do know that by Italian standards, it is a fairly robust figure.

Very few of the people I know here in Spoleto take home more than €1,000 at the end of the month, yet they manage to live in fine style. The family next door is a case in point. The parents have modest jobs, but they eat very well, take regular holidays and, as my small daughter said yesterday, “they must be rich because they have four Nintendo Dss.”

A good friend who is a senior nurse and works horrendous shifts at Terni hospital has a pay packet of little more than €1,200. Like so many Italians, she always looks a million dollars, drives a shiny new car and has a spanking new cell phone which puts my antediluvian model to shame. Crisis or no crisis, Italians may not talk about money. But they certainly know how to put on a very good show.