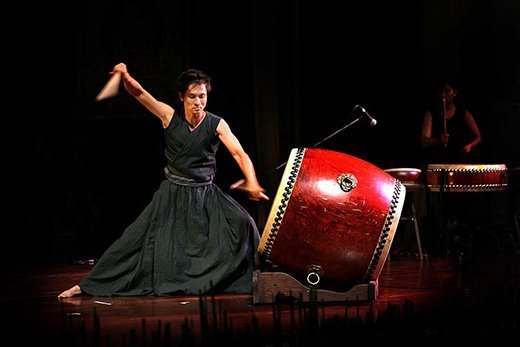 In Japan, Taiko drumming is associated with military action, theatrical productions, and even religious ceremonies.
I

recently heard a performance of Japanese “Taiko” drumming that had a very strange and unexpected effect on me.

While most people who don’t know me well tend to see me as calm and content, that’s not quite the full picture. I’m as full as anyone of turbulence, anxiety and existential thrashing, and I’m certainly no stranger to insomnia.

For me relaxing means doing. If I’m in a particularly in a bad mood, I’ll usually resort to something physical like baking or walking.

The drumming performance I attended was announced as a traditional form usually associated with war and combat. The drummer transmitted instructions like a bugle might in the West – to attack, to retreat, to arouse and incite the troops. Taiko, which refers to an entire group of percussive instruments, are also used in religious ceremonies and thought to have calming properties.

What most struck me, in fact, was that after almost an hour of what might be considered aggressive drumming, I came out very relaxed. I felt unexpectedly at peace and whole, my mind clear and comfortable.

It made me think back to how a mother figure soothes a baby. If the infant is crying, it’s not helpful to try to distract it with noises, laughter, clapping or happy faces, which will only cause further upset. There are few things that feel as wrong as using laughter as a remedy for tears, particularly infant tears.

After almost an hour of what might be considered aggressive drumming, I came out very relaxed. I felt unexpectedly at peace and whole.

Columbia University researcher Beatrice Beebe, whose work I have written about before, studies infants and their face-to-face communication in an effort to explain how parents successfully soothe their babies. First, she says, they have to show they “get” the baby’s actual state of mind. For example, if there’s a rhythm to the infant’s crying, the parent tends to soothe with the same rhythm. An ooOOOoo meets the baby’s waaAAAaa, with the same duration and timing. It’s loud enough to hear above the wailing but a bit softer than the actual cries. When the baby feels “understood,” these sounds can be drawn out more oooOOOooo, longer and softer. Watching these films is remarkable. In a short time, the cries of a deeply upset baby grow longer and softer along with the mother’s vocalizations. Soon, the infant is back to normal. In order to soothe, we must first show we understand.

So what happens with an adult? Have you ever been nervous, anxious, enraged, and been told to “calm down,” as if such feelings were regulated by a faucet? We might as well tell a hungry person not to be hungry. Feelings of dismay and agitation are by nature the opposite of calm. They’re not adjustable.

What’s all this got to do with Japanese drums? The drums were loud, powerful and jarring – hardly calming. But that fit quite well with my state of mind. The sounds somehow “got” me. My unpredictable and unsettled feelings began to align with the rhythm of the drums, complex but more predictable. Gradually, their sound drowned out all other noises, in particular my own inner sounds and voices. They became the dominant stimulus and carried my own bodily sensations along with them, each slight jolt felt not only with my ears but with my whole body: Boom, boomboom boom boom, boom, boomboom boom boom. What I can imagine as erratic brain signals grew more orderly, like shaking a tray of marbles and seeing them line up in triangular patterns. Or the once-common practice of defragging a computer hard drive to make it more efficient by putting all the partial bits of content together into an orderly collection.

The ordering process made me think of scenes of kids in front of gigantic loudspeakers at raves, swaying to loud rhythmic music, unable to soothe themselves on their own but finding some solace and calm in the rhythmic riot of blasting rock music.

We who are often unsettled are constantly being told to imagine peaceful scenes, listen to dripping water, think of the sea, or play soft innocuous music. This, we’re told, will help us find peace. Frankly that only makes me nervous! Sometimes peace emerges from the least expected places, and relaxation can be the result of powerful stimuli.

About the Author: americamag53