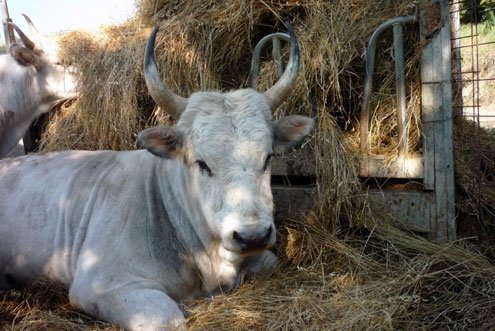 ist rises from dewy green fields. It lingers over the forests, hills and valleys of the Apennine Mountains near the town of Pavullo nel Frignano in the province of Modena. Sun bursts through clouds hovering above thinly veiled crests and peaks. We’re at 682 meters. Soon, the light chases away the mist and turns the vineyard golden.

The pungent fragrance of ripened grapes announces that the vendemmia, the harvest, will begin tomorrow. It is the first weekend of October and my husband Marino and I are staying at the 16th century Beneverchio farmhouse, an agriturismo, that uniquely Italian combination of farm and tourist inn.

It’s also chestnut season so we’ll gather castagne as we check out a new hike. Ornello, our host, describes the route.

“Take the road to Montorso. The trail starts at the church. Come out on the road again at Niviano and circle back here.”

“Road.” Marino looks at me. “I’ll get our Nordic walking poles.”

After an early Sunday breakfast, we walk up Via Niviano from Beneverchio to a nearby crossroads. We take Via Lavacchio on the right, up to Lavacchio, a village on a crest overlooking flat Pavullo on its high plain with surrounding hills. Lavacchio has a playful air. Houses and walls are covered in fanciful, contemporary murals — tiles, frescoes or bas-relief. They depict the tales and habits of the Frignanesi, a people whose origins lie in feisty Ligurian-Celtic tribes.

Lavacchio was a Roman camp, a place for soldiers to bathe and to water their horses. Although its tower was first documented in 1034, it had served earlier as a lookout against barbarian invasions and was later used to watch over the Pistoia-Modena road. Below the tower, foothills roll away to the Padana plain and the city of Modena. On the other side, hills rise into forms like baby volcanoes and into great mountains like Monte Cimone (2,165-meters) and Monte Rondinara (1,640).

We count five towers on the horizon. One belonged to Matilde di Canossa (1046-1115). Another is part of the castle of Monticuccolo, three kilometers from Pavullo and birthplace of Raimondo Montecuccoli (1609-1680), a great European military commander and prince of the Holy Roman Empire.

From Lavaccio, we descend to the crossroads. Straight ahead is Via Montorso, leading to our next destination, the church at Montorso di Sotto and the trail. The quiet asphalt road rises along a ridge. On one side are mountains and woods. On the other side are Pavullo, Querciagrossa and Lago della Torba; small “Peat Lake” is all that remains of ancient marshes and bogs.

A fellow Nordic walker nods and passes by. A wet dog emerges from underbrush in the wood, wags its tail and disappears — a friendly truffle hunter. We rest our poles against a large chestnut tree. Its spiky, round burrs burst open on the ground from the long drop, making it easy for us to gather chestnuts.

With backpack full, we set off. After half-an-hour, Montorso’s church steeple appears below. Its cemetery is on our right. Left of the church is a red-and-white Club Alpino Italiano (CAI) sign and a jeep track to Niviano, a village a good hour’s walk away. After the third house, the well-signed dirt road descends into humid woods. Bright green ferns hide a brook babbling in a ravine. Twenty minutes later, past two stone houses further down the trail, the road peters out at a farmhouse where woods open to orchards.

The trail is not marked here. We pass a rustic hut made of dark brushwood, walk down the field, and find motocross bike ruts. We follow them up along the edge of the woods to CAI signs indicating a trail among the trees. The track becomes muddy and deeply rutted. There is a short, steep climb. Soon, the scavo di Niviano, an open pit quarry, gouged from a mountainside, is visible on the right. After 10 minutes, we reach an abandoned stone house and raid late-season blackberries bushes to soothe our grumbling tummies. The trail widens and then meets the asphalt road at Niviano.

The road ascends and bends around Niviano’s isolated, 15th century, San Maria Assunta church. A branch to the right leads to the Riserva di Sassoguidano, a nature reserve for animal and plant species with forests, marshlands and good bird watching.

We keep to the main road, taking short cuts through fields and munching on windfalls — sweet, juicy purple plums and tart, mottled, rough-skinned apples. In another twenty minutes we are back at Beneverchio farm. White Romagnoli cattle watch as we climb the path near their pen. Our poles click on stones.

Ornello stands on the terrace. “You made it.”

“Allora, today you deserve three primi. Claudia has prepared 16th century pasta recipes.” He pats Marino on the back.

They discuss Ornello’s black Romagnoli pigs that forage in the woods. The conversation leads to cow breeds and Parmesan cheese, and the four-year-old bull that must be sold.

Ornello’s eyes well up. “Un toro buono. Sired all the younger cows. Loves to have his horns caressed.”