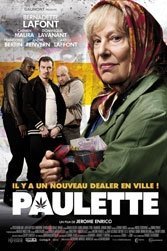 French director Jérôme Enrico’s social parody uses the tribulations of elderly Paulette (Bernadette Lafont, who is in her mid-70s) to demonstrate the indignities suffered by those who lead precarious lives in drab Paris suburbs. Society offers few choices to the likes of Paulette, whose pension doesn’t allow her to meet her rent or utility payments. Instead, she picks up market leftovers as “groceries” and lives in isolation from community around her.

That she’s insolent, caustic, and racist doesn’t help. A widow and former pastry chef, she blames immigrants for her plummeting financial status and disappearing self-esteem. She can’t accept that her daughter Agnès (Axelle Lafont) has a black husband (a police narcotics detective) or a son by him. If only her capacity to insult didn’t grow tedious, which it does.

The desperate Paulette finally turns into a pusher, but when rival thugs steal her stash and beat her, she stretches what little she has left into a new business: making “special” pastries. Her success generates envy and the interest of a drug kingpin, a Russian, who demands to meet her when he comes to town. When her grandson is kidnapped her underworld life turns very real.

Though Enrico frames some of his story in comedy, the danger is real, as is the suspense. Despite its weak points, “Paulette” is a poignant and intriguing look at how desperation and sustained poverty can drive the elderly — and those around them — to desperate acts.