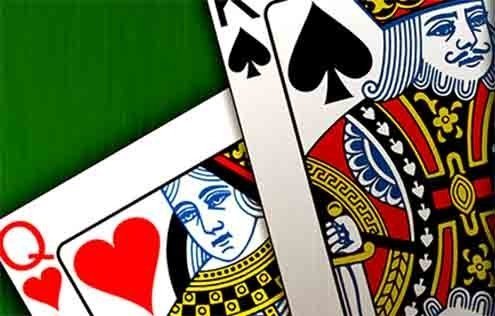 Things don't always work out, so you start again.
A

fter work on Fridays, I walk to Bryant Park. Situated between Fifth and Sixth Avenues and 40th and 42nd street in New York City, it’s a hub for city dwellers eager to enjoy the outdoors. Not only does it have a great lawn for sun bathing, but also bocce courts, Ping-Pong tables, putt-putt golf and carousel horses galloping to a lyrical French tune.

On warm summer days I head for an area set aside for table games. A small kiosk loans board games like Scrabble and Sorry. But me, I’m after something simpler: a humble deck of cards.

There’s something about the feel of a deck of cards in one’s hands. The size fits snugly in the palm, the corners rounded for comfort. The smooth finish makes for easy shuffling and dealing. And somehow, though they are made from mere paper, a deck of cards seems to last forever and even improve with use and age.

When I was a kid, my favorite card game was Rummy. But these late spring days, under a canopy of linden trees, I’m playing Solitaire.

As the name implies, Solitaire is a game for one. Winning is less a matter of skill than luck, and how the cards play out. But the game requires a quiet focus I find soothing. In the 10 minutes or so it takes to play a hand, my world slows down and becomes orderly. I feel in command of royalty, kings and queens lining up by rank. And every card is valuable and has a place.

At the end of her life, my mother played a lot of Solitaire. She had her favorite chair in the living room and next to it a long paddle board that she placed across the armrests to form a table. She also slept in this chair. Plagued by insomnia and a poor heart, the chair was her bed and comfort. When she woke in the wee hours and remained wide-awake, and alone, Solitaire kept her company.

On this particular Friday under the linden trees, the cards are not coming together. I keep turning up 5’s and 7’s. The adjoining cards I need seem buried and out of reach. Though it’s just a game, a feeling of futility and uselessness fills me. I turn the deck cards over and over, hoping for a different outcome. I wonder why I bother with this game. I should just head home.

But then I remember my mother. I imagine the nights she turned card after card to pass the time, searching for the ace or jack that would order the game in her favor. Her stoic disposition probably didn’t allow her to feel futility or desperation when a hand dried up. Unlike me, she simply picked the cards up, reshuffled and started another game.

I looked up at the trees above me. The wind blew gently through their leaves and the branches seemed to dance. Relieved, I decided to give up on this game. I gathered up the cards, placed the rubber band around them, and returned them to the kiosk.

I may have lost my game today but next Friday I’ll get another chance to be with my mother, and play Solitaire.