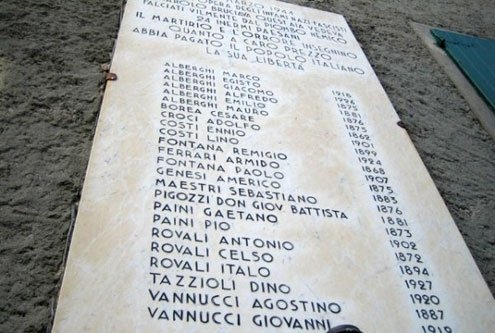 Memorial to the dead in the village of Susano.
O

ur landscape defines us. It scribbles in our DNA, influences our thoughts, affects how we view the world. Landscape invites us in as pathfinders and trail followers. A community of walkers, human and animal, makes and maintains a trail. Signs and memory mark a path. Rocks, trees, prints, milestones, and fences — each offers a reading of a path’s history, its followers and inhabitants. Stories also travel on paths, and paths conceal stories. The two often intertwine.

On this hot August day, my husband Marino and I are on Monte Santa Giulia in the Apennine Mountains of Modena in Emilia Region, where his mother was born. Whenever we visit, we walk the same breezy circuitous trail not in an effort to conquer peaks, but to encourage the landscape fold us into its memory. Behind my mother-in-law’s stone farmhouse, the road curves round a high white wall. And suddenly, time stands still.

It’s March 18th, 1944 along the so-called Gothic Line, the retreating Nazi army’s final defensive position as it retreated from Italy in the final stages of World War II. In our family’s farmyard, a young German soldier from the 1st Paratroop Panzer Division Hermann Göring (the elite armored troops that repelled the Allied advance for five months at Monte Cassino) holds a mother, a 12-year-old girl, and an elderly man at gunpoint. He draws his thumb across his throat and motions with his hand, signaling that they should run, and fast.

Inside the house, an Italian Fascist is busy looting. My mother-in-law, now 80, is the 12-year-old girl. I see her running hand-in-hand with her redheaded, 34-year-old mother. Their elderly neighbor lags behind. As they round the wall, shots ring from the upstairs window. Bullets whistle past their ears and ricochet off the wall. The man falls. There is bloodshed and bloodcurdling screams. Mother and daughter run, first through fields, then into the woods, running, always running, to father and brothers. They hide. Smoke and the smell of ash fill the air.

The nearby villages of Susano, Costrignano and Monchio are all aflame. Houses and barns have been torched, with animals screeching in fear and searing pain. In all, 136 men, women, and children will be massacred as part of Fascist and Nazi reprisals following the death of a German officer. By night, my husband’s family moves down the mountain, away from the flames, the smoldering and stench. They sleep in barns, sheltered by mother’s relatives.

In late October, a Rome military tribunal will hear appeals from three former German officers and soldiers — ages 85 to 95 — convicted of life imprisonment and in connection with the so-called Monchio massacre. Writing in his diary, one German corporal labeled it “a rich booty of ham.” Every year local people walk to vigils.

I am returned to my August day. Before me, the wall and the road yield to a trail lined with Zia Anna’s fruit trees. This year, despite the drought, the plums are ripe and plentiful. Anna’s jam is dense and dark, perfect for toast and tarts, puckering the lips, sweet on the tongue.

All is quiet as our path ascends gently past Zio Mauro’s beehives. The trail then descends towards another road into thick fresh woods. Broad-leafed plants signal water nearby. Underneath, a stream gurgles.

It was 1943 when Grandfather took the wounded partisan, hid him in his cart, and drove his oxen down this road on a two-hour journey to the river. He delivered him to a safe house in the valley.

“Dangerous to go,” he would say later. “Dangerous not to. Did it on a market day. Pretended to sell an ox, buy another one.”

For his work, Zia Anna, his eldest child, has a partisan’s pension.

The odor of cow manure announces a farm. Roaming chickens cluck. Onward, up a steeper road, we pass another farm. The smell of pigs lingers.

At the crest, we turn into a land once plowed by oxen but now by tractors, which straddles the ridge. We enter cool woods where sun breaks through branches of chestnut, oak and hornbeam. The trail narrows, softer under foot.

Marino and I walk forwards, deeper into the trail’s history, following previous tracks while moving closer together. Paths are head-clearing places. They induce reflection just as motion spurs communication. It is on paths where we recount our histories; clear up misunderstandings, make decisions. We think with our legs. Our spirits lift.

Trees fan up a breeze as we come to the edge of the woods, to another sloping crest with a crisscross of routes. Further down the line in the land, there’s a story, a photo and an engraving in stone. Someone still leaves flowers in memory.

Grandfather once told Marino the story of the wounded man. “I was taking the oxen to market,” he said. “Saw him standing there, held by two partisans. I passed real close. His eyes told me to keep going,” Grandfather said. “I fought with him in World War I. He was a good man. The partisans, his own, shot him. Don’t know why. The stupidity of war, I guess.”

Marino and I turn and follow the crest upward, into Il Parco della Resistenza. We pass near the ridge-top church, rebuilt after German shelling reduced it to rubble. Long before, a Bronze Age sword lay buried there and ancient rites were performed around it. A circle of stone statues in a meadow, Stonehenge-like, tells stories of the massacre. On May Days in the 1980s, in the woods near the circle, i magi — priestly sorcerers — would act out stories of the killings and other tales.

We come to a fork. Marino waits while I take a narrow, less trodden path. It leads to a stand of spruce trees. In the 1980s, they were small. Now their bluish branches soar 30 feet straight up. The blue spruces don’t hail from this land. They’re omnipresent in the Rocky Mountains and common throughout North America. I pause near their scruffy lower limbs. I touch their flat, prickly needles. Balsam resin scents the dry air.

For an instant I am home in Ontario, breathing another oxygen, my feet cushioned by moss. We stand together, the trees and I, whispering a common history, two transplanted species with common DNA in an adopted landscape.

Details about getting to Monchio are contained in my 2008 column Stone cottage stroll. Information about the Monchio military appeal and its outcome (in Italian) may be found at the website of the newspaper La Gazzetta di Modena. The appeal is set for Oct. 24. Interviews with some of the remaining survivors have also been compiled and posted online.