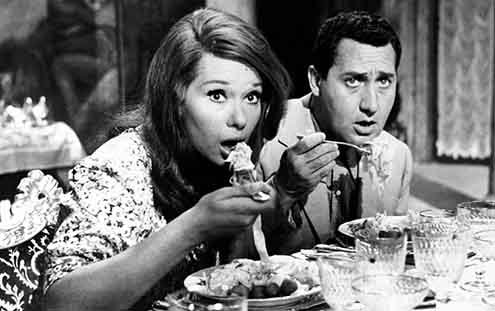 talians semantically divide pasta into two basic groups, “short” pasta and “long” pasta. The short pasta class includes stubby penne, rigatoni, gnocchi, farfalle, fusilli, mezze maniche, and so on. Some shapes — conchiglioni, paccheri, and cannelloni — don’t qualify for either of the long or short categories but are large enough to be stuffed and baked. Others, including egg dough ravioli or agnolotti, tortelli, cappelletti and tortellini, come already stuffed with a variety of fillings. Beautiful mouthfuls dressed with an endless array of sauces.

But it’s the long pasta category — such as spaghetti, tagliolini, linguine, fettuccine, tagliatelle, pappardelle, bucatini and other foot-long noodles — that all but symbolized Italian pasta.

This is the pinnacle of the Italian food pyramid, eaten and cooked worldwide.

And yet some folks still don’t know how to twirl it on their forks. Italians do. They learn how to twirl before being potty trained. Not so in America, where some people still use spoons. That’s heresy here.

Over the years, I’ve seen Rome pasta vignettes worthy of a Vaudeville review. I’ve watched tourists dig in and toss around in their bowls of noodles only to end up discouraged and defeated on an empty stomach. I’ve witnessed many shrug off table manners and just lift and slurp. Some others use a knife to shorten the strands of pasta. Those nostalgic for olden days tie a large napkin around their neck before going to battle, something no one does in Italy anymore — not even when eating dangerous bucatini, proverbially known to lash out and spatter.

So what is the best way to deal with a plate of unruly pasta ribbons?

Practice makes perfect. Why do you think twirling talent is so ingrained in Italians? We practice. A lot. Pasta is as appreciated as it is easy to make. Both at home or dining out there’s no lack of training time.

Here are my five foolproof steps to perfect pasta twirling. Don’t give up if you fail the first few times. Again, practice is key (after which comes a brief diet).

Step 1: Try a dry run. Hold the fork upright and twist it on its axis clockwise, the teeth directed down. Start by leaning the prongs on the plate’s flat surface, then as you get confident with the one-hand twirling motion, you can start exploring other parts of the dish, like the lip, or the inside of a bowl. The fork will wobble initially and you’ll have to figure out the exact balance point. What’s important is becoming familiar with the object.

Step 2: Start small. If you begin with a big bulky quantity on your fork, the twisting motion will pick up mass and momentum, only enlarging your mouthful to unmanageable size. Think snowball effect.

Step 3: Pick out a few noodles, say four, from the outer rim of your portion (never the middle). Start twisting clockwise and balancing the teeth of the fork on the plate, pivoting slightly. The quantity wrapped around the prongs should have doubled, but that’s okay only the initial four remain. It will be harder when the loose strands dangle a bit from the fork, but a quick and controlled slurp can sort that. And yes it’s okay to bite off the loose strands, as long as they fall back onto the plate and not your lap.

Step 4: Keep working from outwards in. If you see the forkful is getting too big, shake the pasta off and start over. If you serve yourself a big enough portion, you should be grasping the notion by the end of the serving.

Step 5: Reward yourself with a nice dish cleaning scarpetta — bread pushed down like the sole of a shoe on the remaining sauce — and a tasty glass of wine. You’re now officially Italian. Bravo.