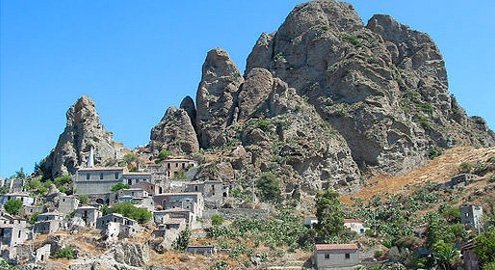 The autostrada to these parts only began operating in 1974.
T

his spring, we visited a friend in Calabria. As in past trips, we refreshed ties with friends and met relatives. This time, though, we added a horse trek in the Aspromonte, Calabria’s mountainous spine. We drove down to Reggio’s outskirts along rough, two-lane roads, lined with olive and citrus trees, and spotted with squashed oranges. The autostrada to these parts only began operation 1974, finally linking Calabria to Rome in under 10 hours.

At every intersection, elderly men hawk crates of lemons and oranges and bundles of broccoli rabe from Api and car trunks. The olive and orange groves are sporadically interrupted by commercial strips where the merchandise is as motley and poorly-displayed as in the Third World. Modern marketing is absent. Prada and Armani who?

Since my last visit three years ago, I find new shopping centers. They are anchored by non-Italian retail giants. Rumor has it that they are nighttime drop-off points for garbage bags of cash destined for laundering. I doubt their Milan branches operate similarly.

We stop at a biological co-op that farms land confiscated from the ‘Ndrangheta. It operates notwithstanding warnings of underworld reprisal. Young people otherwise without hope are taught farming skills (and the co-op produces excellent oil).

The Calabrian ‘Ndrangheta has created a Manichean world divided between the perbene (for good) and the malavitosi (the criminal). Feudal relationships that once protected social hierarchies now form a benign “cosa nostra.” Unfamiliar people must be vetted before any transaction. The code is “look into it first,” “call before you commit.”

We reach the stable on Reggio’s outskirts, tack up, and to get to the hills pass through Pellaro, where Mafia boss Pasquale Condello was arrested recently. Despite control over a billion-euro cartel of drugs and guns, he spent decades on the lam in an unpaved hamlet whose cinder-block houses and feral dogs look like they belong in an Oxfam poster backdrop.

My Milan friends would shiver at this close encounter. Their only idea of the Aspromonte is as the stronghold of ‘Ndrangheta kidnappers in the 1980s. Nowadays, the ‘Ndrangheta is too busy for that. It runs Europe’s cocaine-distribution monopoly, which is more lucrative and less risky.

Abandoned farm buildings dot the hills we climb on our horses. Terracing on the steep slopes crumbles, tipping neglected olive trees into drunken angles. Only the ghosts of emigrated peasants and landowners live there now. Defeated and depleted by post-war agricultural reform, neither withstood the costly good intentions of a belated French Revolution on paper.

Cactus plants are everywhere. The scent of jasmine and fruit trees fills the air. Not yet at the summit’s fortress of Motta San Giovanni, we are still high enough to see the future site of the Messina bridge. Snow is visible on distant Etna. Just a bit higher and we could see both the Tyrrhenian and Ionian seas. Vegetation runs riot. Weeds and wild banana and bergamot trees tear a cement culvert to pieces. The plants are as oblivious as nearby residents to the disemboweled washing machines and cars filling the currently dry channel.

Even in the ubiquitous trash there is a certain raw vitality. Like the un-harvested oranges and lemons littering the ground, refuse is a perverse expression of abundance and profligacy. Hoarding and husbanding resources is only for harsh northern climates. Here, more is always on the way; more fish and olives, more fruit.

The permanently unfinished buildings, which are as characteristic of Calabria as Venetian villas or Puglian trulli, are vital, if ugly. Their rough pilasters and nude reinforcing rods say “Someday more money will come. Someday far-flung children will settle and fill them with grandchildren.”

Stone walls criss-cross the countryside. On one, an old woman sits immobile and mute. Her blank blue eyes are as cryptic as a Sybil’s. Way below, legendary Scylla and Charybdis guard the Strait, floating in ancient and Mediterranean stillness.

Suddenly our leader gallops ahead. His saddle is Western. He wears a Stetson hat and cowboy shirt. There is a cactus in the background. We are Out West …

Jerking me from my reverie, the sight is less incongruous than transforming. I see it all in new light. The tenacious volunteers at the agricultural cooperative are like Scandinavian homesteaders. Savage landscapes resist civilization. The architectural vernacular — reinforced concrete — is direct and simple. The sea beating rocky cliffs is a real one, not an over-grown lake for tourists to tiptoe into.

The ride was so beautiful, we plan to do another, and this time from a stable by the sea my friend has heard about. But before reserving, she calls around to check. Are the owners perbene?

Yes. So we go ahead and commit.