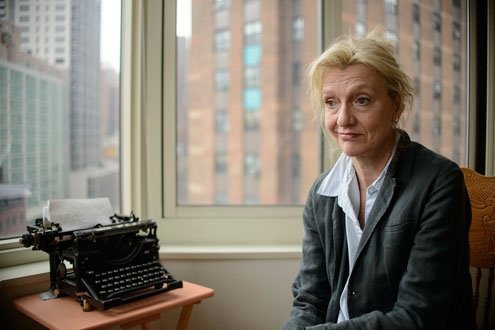 Collection editor Elizabeth Strout admits the past plays a major role in her selections, but that role is too large.
B

e sure to add “Best American Short Stories, 2013” to your ritual “tops of the year.” This year’s edition highlights some of America’s keenest writers as they X-ray the landscape and its people. It also magnifies a number of troubling trends. Love has fallen into a near-coma. Families are disjointed or dysfunctional, or both.

While guest editor and author Elizabeth Strout says “a few” of the stories focus on the past, her arithmetic is off. The past, and not even the necessarily recent past, is a constant — even when it’s not central to the fabric of the story.

A shining exception to gratuitous “past-dwelling” is Jim Shepard’s excellent “The World to Come,” which makes 19th-century rural New England into a setting for a universal tale about hope and loss. The narrative, which spills from a private diary of a child bride, is poignant and immediate. The bride is wed to Dyer, a middle-aged hardship farmer with “a disturbed head.” Her only name throughout is “Dyer’s wife.”

Overall, the story-selection represents a kaleidoscope of directions. There are double-layered scenes and stories in which script dialogue replaces traditional narrative. Some of the stories read like perfectly honed craft shop exercises. But a few veer away from calculated prose.

Alice Munro’s “Train” focuses Jackson, a homebound World War II vet who jumps off his Ontario-bound train before it reaches his home stop. Is this (in the Munro tradition) the turning point in her protagonist’s life? Jackson decides to walk the rest of the way home, but he doesn’t. Instead, he walks in the opposite direction, entering “a different block of air.” Years pass, then decades. Jackson becomes part of another life but leaves that one as well. As always, Munro’s prose is made credible by her perfect ear for colloquially tuned reflections.

In “Miss Lora,” Junot Díaz introduces middle-aged but still-hot “Miss Lora” and her teen lover in the year 1985. His narrator takes the form of “you,” though it’s hardly necessary: “You were sixteen years old and you were messed up and alone like a motherfucker. You were also convinced — like totally, utterly convinced — that the world was going to blow itself to pieces.” Miss Lora is the narrator’s teacher, and satisfies him in ways his girlfriend won’t. Older, he’ll tell a new girlfriend about his teen liaison. “They should arrest that crazy bitch,” she says. “It wasn’t like that,” says the narrator. The reader must decide.

In “The Provincials,” Daniel Alarcón’s asks us to identify the provincials in his title. Nelson, the narrator, recalls a long-ago trip with his father Manuel from Mexico City to the latter’s provincial birth town. Nelson’s great-uncle has died. In the town, locals confuse Nelson with older brother Francisco, who immigrated to California. Nelson, an unemployed actor, pretends to be Francisco. If he can’t gather the courage to leave, at least he can act “the role I’ve been dreaming of all my life.” What’s authentic and what’s role-playing?

Refreshingly free of gadgetry is Michael Byers’ “Malaria,” which almost seems to stumble into discovery. Down with the flu, middle-aged Orlando feverishly remembers a college year and a series of puzzling episodes tied to his friend George Vardon. George wasn’t suffering from the aftermath of malaria, as he claimed; he was just insane. Yet Orlando never devised a handy way to explain this (“I couldn’t tell his tale then… and I can’t now.”) But that’s just what he’s doing by trying to remember George’s life and times. The question, “What is George Vardon to me?” opens the door to understanding Orlando’s own character.

Though families loom large in all these stories, the focal relations are often tightly restricted: between siblings, cousins, or children with either the mother or father. The matter of single parents, which should be a rich field of exploration, goes untapped. Conveniently, there are partner-parents, who usually figure as shadow walk-ons.

David Means’ “The Chair” piles clue onto clue, transforming a young boy’s father figure from a protector into a psychotic menace. “Magic Man” by Sheila Kohler is yet another “years later” view, this one tracking destructive denial patterns between a mother, a daughter, and a sister.

The best of the best is George Saunders’ “The Semplica-Girl Diaries,” which has been on a media roll since it was first published (and included in Sauders’ much-acclaimed 2013 “Tenth of December” collection.) The S-G Diaries is both good and shocking. Its power comes in part from narrator Thomas’s rapid-fire diary entries and partly in the way it savages middle-class America. Thomas and family struggle to keep up with the proverbial Joneses. He wants the same yard decorations as the neighbors. What are the Semplica Girls? Young immigrant girls made to look like hanging ornaments and loosely connected by a “Semplica patented” microline that passes through the backs of their heads. Everyone has them. It’s a brilliant if grisly view of the American Dream.

Overall, despite the exaggerated emphasis on the past, the collection represents an intriguing, often exciting overview of how America’s writer-witnesses see their country.