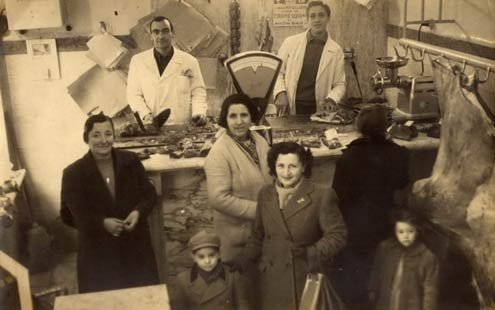 Er cavallaro, left rear, and family in the Testaccio butcher shop before moving to the sea.
W

hen I came home as a boy I’d often find my Grandfather Cesare waiting. He’d fix me with his deep brown eyes and say, “You’re never going to guess what I have for you.” The way he said it made me know that dinnertime was just around the corner.

My grandfather was a tall and thin man with a face ploughed by deep wrinkles. I considered them the scars of World War II suffering. But he never talked about it and I never asked. He had shiny, combed-black hair that smelled of brilliantine (he wore a thin hair net at night to protect it). Stricken by polio in his youth, his bamboo cane gave away his every move.

In the 1960s, he owned a butcher shop in Rome’s working class Testaccio neighborhood that specialized in horsemeat. People called him “‘er Cavallaro,” The Horseman. His wife worked at a nearby Garbatella neighboorhood osteria owned by his parents. Food was a way of life.

But in 1966, at 52, seeing a business opportunity and wanting to move closer to the sea, he closed the butcher shop and moved the family to Passo Oscuro, or “dark path,” a tiny fishing village on the Rome coast near Fiumicino where he opened the town’s only gas station.

That’s where my memories come in. Every evening at dinnertime he’d shut down the pumps and shake off his mechanic’s blue overalls — which had the word “Chevron” scrawled in giant letters on the back — and magically transform himself into a master chef. He’d put on an apron and rummage through the ingredients with his big hands the way a conductor might direct an orchestra before the start of an opera. Soon the gas burners were on and the house was redolent with rich smells. Suddenly we were all famished.

Until very recently, top-quality fish was reserved for Rome’s elite and out of reach to common folk, who improvised both in day-to-day life and in the kitchen. Thornback meat is modest at best, hence the Roman saying, “…l’arzilla in brodo con i broccoli è la morte sua.” — “… skate broth and broccoli will be the death of you.”

Later in life my grandfather became an excellent fisherman. He’d troop to the seashore at the end of the day just as local families towed wailing children away from their newly-beloved sandcastles and retreated. He came home smelling of brine. He’d often substitute the much tastier rombo, or turbot, another fish common to Rome waters (and which he’d caught), for the far more ordinary skate.

This is a great late winter recipe. Have it with a delicately-flavored medium-body white, a Trebbiano for example (from Abruzzo, Tuscany or Puglia).

• 2 salted anchovies in oil, each about 5 cm long

— Clean and gut the fish and put it in a medium-sized pot. Add 2-to-3 liters of water, 2 crushed garlic cloves, 3 or 4 peppercorns and one sprig of parsley and place over medium heat.

— Bring the broth to a boil after 10 minutes turn the heat off. Remove the fish from the broth, careful not to let the fish disintegrate.

— Clean the fish (removing the skin and bones) and place it on a large platter. Add fresh parsley, a little pepper, olive oil and fresh squeezed lemon juice. You’ll serve the fish after the pasta and broccoli.

— In a deep pot — it needs to hold 2-3 liters of broth and other ingredients — warm up three spoonfuls of extra-virgin olive oil, 1 or 2 thinly diced garlic cloves, and the red pepper. Then sauté lightly. Before the garlic changes color, add the salted anchovies. Use a spoon to dissolve the anchovies into the mix and add the tomato purée.

— Lower the heat on the sauce and add the filtered fish broth. Let it boil for about 10 minutes.

— After cleaning the broccoli, remove its most tender stems and add them to the broth. Add salt, as needed.

— After 6 minutes, snap the spaghetti five ways, add it in, and cook for the amount of time listed on the box, less 2 minutes for al dente, and serve hot.