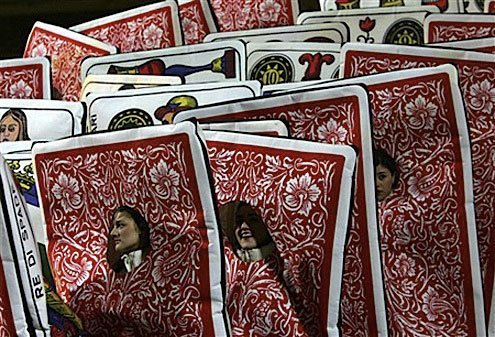 Lots of enthusiasm, even at the end, but painstaking lines.
T

he good news first: What first caught my attention as I stepped off the train in Olympic Turin two months ago was the energy. Italy, land of slow lunches and public transportation strikes, can stage top-notch events. Turin proved it.

It was getting those events, I soon found out, that would make for painful memories.

Turin received an Olympic makeover. Colored lights and large Olympic banners livened the streets; stalls sold chocolates and Olympic pins. Americans, Japanese, French, Australians, some dressed in their nations uniforms, gave the place a big-event atmosphere. The star of the show was the Medal’s Plaza, located in Palazzo Madama. The piazza near the palazzo was morphed into a huge outdoor concert venue complete with glitter and track lighting, all of it walled off from the public by rows of metal detectors and Plexiglas barriers.

Walking back to my room after watching the opening ceremonies in Piazza San Carlo on a huge Jumbotron, I got a taste of Olympic fervor on a smaller scale: A local family gathered outside their apartment and enjoying fireworks going off over the stadium.

But planning in Italy can be like mismatched wine. The idea of planning gets done, but the execution gets lost in translation.

Waiting for the bus to take me from Sauze d’Oulx, the site of the freestyle competition, I got a taste of what lay ahead. The bus arrived after a half-an-hour though it was the only way to reach the town. The driver — not a local — told a group of five snowboarders to strip their boots. With no choice, they did — boarding in wet socks despite below zero temperatures.

The snowboarding in Bardonecchia was another study in contrasts. The event itself was great. The bleachers offered unobstructed views, and the well designed halfpipe course held up throughout the day. All 44 athletes got a chance to show their stuff.

Getting to and from the venue was another story.

The site was located at a resort called Melezet, three kilometres away from Bardonecchia. All 7,500 spectators had to take the bus to reach the narrow valley. For security reasons, there was only one entrance, a long snaking path that originated 500 meters further up. Spectators had to first cross a small bridge, then walk down a snow covered path that bordered a river.

Organizers mysteriously didn’t consider that once past the security, long-suffering spectators (some had waited hours to get in and had hours ahead before the event) might like some shelter. Maybe a tent or a warmed waiting area. No such luck. I spent the longest 90 minutes of in my life, freezing in the minus-10 degree temperatures.

Leaving was another study in chaos.

Instead of channelling people out several exits, all spectators were required to leave the same way they came in, which meant retracing the same path: path, riverbank, bridge, etc.

But the bus stop couldn’t accommodate such large crowds. In the end, only groups of 30 to 40 people were allowed to cross the river to wait at the return stop.

Logical planning would include enough buses to take all those who attended the event back to their various home bases.

For stretches of 20 minutes, nobody moved, and when they did they inched ahead.

It wasn’t long before people wandered off into the woods seeking alternative paths to the bus stop. Others decided to scale the banners that ran along the path and use them as a parallel route.

An exasperated Olympic volunteer shouted that anyone who fell wouldn’t be rescued. Eventually someone made it across the river and promptly gave a little bow, inducing a flurry of snowballs from the waiting crowd.

Still, the buses were far off.

But let’s end with the good news. What I remember most from Olympic Turin is still what I felt at the start: The energy.