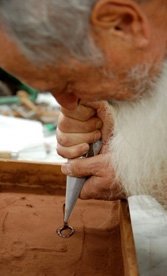 taly has a way with chocolate. It’s nestled in bonbons and creamy bars, in gelato and cakes; it’s even an ingredient in savory stews. Nothing keeps winter in check better than a cioccolato caldo, steaming hot chocolate topped with luscious mounds of whipped cream. Chocolate is also a vibrant industry. Italy produces more than 200,000 tons of chocolate and cocoa-based products annually, with annual sales of €350 million.

But chocolate hasn’t always been dessert fare. For millennia, cocoa bean growing was limited to Central and South America. Both the Maya and the Aztec people revered the beans and used them as currency (who says money doesn’t grow on trees?). Ancient cocoa was served to honored guests as a water-based vanilla and chili pepper concoction called xocolatl.

European chocolate, like beans, was happy accident of Spanish New World exploration. On his fourth Atlantic crossing, Columbus returned with cocoa beans which he presented to the Spanish royal court. Early on, bittersweet chocolate thickened stews and sauces while cocoa powder found its way into pasta. The Spanish then sweetened the drink with sugar, popularizing its consumption. The drinking of chocolate migrated from Spain to papal Rome and was in turn passed along to all of the penninsula’s pre-Italian courts. In 1737 cocoa was formally named by Swedish naturalist Carl Linnaeus, who classified the plant with the Greek name Theobroma, meaning “nectar of the gods.”

Italy’s love affair with chocolate is a year-round affair and includes both religious and secular festivals. Chocolate fever kicks off with treat-filled stockings during January’s Befana (Twelfth Night). Then comes Valentine’s Day and Easter. Gelato takes over in the summer with fall’s chilly weather ushering in fabulous hot chocolate.

Turin’s February ChocolaTO opens the chocolate festival season. Once under Savoy family control, Turin and the Piemonte region brims with chocolate makers, pastry shops and bars. When the Napoleon Wars of the 1850s limited access to cocoa beans, creative chefs substituted ground hazelnut paste to create creamy chocolate pyramids known as gianduiotti. These represented the first paper-wrapped chocolates and eventually led to Nutella, a sweet hazelnut-sugar-cocoa spread patented in the 1940s and now as well-known and beloved in Italy as peanut butter is in the United States.

My Tuscan home puts me in the heart of Chocolate Alley. Some 10 chocolatiers are located between Pisa and Arezzo. Most are indebted to Roberto Catinari, who studied chocolate-making in Switzerland in the 1950s before putting his skills on display in a shop and factory near Pistoia. Following his example, new local masters have taken up his calling. Many are the children of pastry chefs or coffee roasters.

Cocoa beans were imported and toasted for chocolate production by the same people that toasted coffee, a process called torrefazione. Catinari, for example, opened his chocolate shop next door to the Trinci coffee roasting shop. Another chocolate maker, Andrea Slitti, is the son of a coffee roaster and coffee shop owner. His father’s store now hosts his son’s prize-winning chocolates. I love the combination of coffee and chocolate probably because the bean-toasting produces an earthy flavor.

Coffee and chocolate are often wedded. There’s the simple dusting of cocoa powder on cappuccino. In Turin, you can get a lusciously rich tall glass of bicerin; equal parts espresso, hot chocolate and a foamed cream on top (see below). These flavors have also inspired treats, including Pocket Coffee, basically a chocolate-covered espresso “shot.”

Chocolate extremism belongs to those who’ll pop chocolate-covered espresso beans straight up. If this sounds too hard core, have a Baci Peruigina and give someone some instant true love.

Cinghiale in Dolce Forte Before Columbus brought back the fruit from the “money tree,” pre-European chocolate was used to enrich stews. This classic dish resembles Mexican mole, but is far lighter.

Grated zest of one orange

3 ounces dried prunes, cut in half

If using wild game, the meat should definitely be marinated. With other meats, it’s optional but recommended.

— Bring the marinade to a boil and let cool.

— Sauté the onion in butter or olive oil until golden.

— Add the meat and brown lightly.

— Taste and adjust seasonings. It should be a nice balance of sweet and sour.

— Serve with creamy polenta or on a thick slice of toasted country style bread.

— Pour the hot espresso into a tall glass.

— Add the thick hot chocolate and stir to blend.

— Top with steamed hot cream (as for a cappuccino).

— Place the cocoa powder, sugar, and 2 tablespoons of the milk in a saucepan and heat until the sugar melts, stirring well to remove any lumps.

— Boil and add the remaining milk. Heat to steaming, always whisking to incorporate the chocolate mixture.

— Turn off the heat and add the chopped chocolate.

— Stir to melt the chocolate and let it sit.