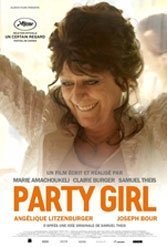 Can a zebra change its stripes? That’s the essential question driving “Party Girl.” Sixty-something Angélique (Angélique Litzenburger) long ago settled into a routine of plying customers and herself with drinks in a nightclub on the French-German border in Lorraine. She dances and charms in two languages. At the end of the night, in a boozy haze, she staggers upstairs to her little room- unless she’s going out with “the girls” for more carousing and breakfast.

All that changes when Angélique heads off to see Michel (Joseph Bour). A former client, retired miner Michel has tired of the nightclub world, but not of Angélique, to whom he proposes. Most of the film’s action leads up to the wedding. Michel is tested but never wavers, while Angélique struggles with the loss of freedom.

The behavior of Angélique’s grown children — adult sons Mario and Samuel (Mario Theis and Samuel Theis, who also co-directs and writes) and daughter Séverine (Séverine Litzenburger) —is in fascinating counterpoint to the impending marriage. At one point Paris-based Samuel, via Skype, helps Angélique compose a letter to her estranged 16-year old daughter, Cynthia (Cynthia Litzenburger). Their chat is poignant and funny.

Directors Marie Amachoukeli, Burger, and Samuel Theis strike a fine balance of tension, drama, and humor in probing free spirit Angélique’s ambiguity in getting out of the business in favor of domestic life. They pull us vividly into working-class lives. Angélique is larger than life, full of warmth, mystery and allure. She also walks a thin line between fun and personal ruin. Her party girl life is so entwined with the lives of those around her that we inevitably cheer for them all.