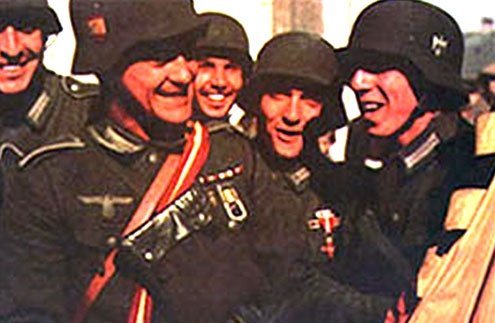 or a reviewer who takes mystery novels as light entertainment, Grindle’s “The Villa Triste” turned out a surprise, mind-catching read. A keen view of Italian political passions.

It’s 2009: in his apartment in Florence’s stony historic center an elderly World War II partisan resistance fighter, Giovanni Trantemonte, is found dead. The door’s unlocked. One downslanting shot passed the back of his head. Was he kneeling? His mouth and throat are stuffed with salt. An autopsy finds intestinal traces. He must have been shot while swallowing.

Salt choking a victim’s mouth? At a glance, Inspector Alessandro Pallioti realizes this murder investigation will hit media throughout the nation. Is there anyone in Italy who’s forgotten that Third Reich payment to collaborators was five pounds of then-unobtainable common salt. Is this Partisan vengeance? In 2009? Yet Trantemonte was no traitor. Two years ago he and other surviving partisans were honored with national awards. Ceremonial photos appeared in newspapers across the globe.

Pallioti finds two odd items on the victim’s dining table, as though he studied them often. A packet of front-page news from 1943 through 1945. And a faded red wartime diary by one Caterina Commaccio. A Florence hospital nurse who joined the Partisan Cell led by her courageous sister Issa. Both died in the war’s final bombardments. Archives report other Cell members were all arrested after traitor betrayal. Their lives ended in a private villa used as Nazi prison on Florence’s via Bolognese. They died in Villa Triste/the sadness villa, detention waystation for Florentine resistance fighters, assumed criminals, and Jews on their way to concentration camps

So we’ve two, suggestively linked Florentine tales. Recounted in parallel with a tactical precision that grabs and holds your attention. The ensuing murder investigation of Trantemonte’s violent death runs alongside Caterina’s 65-year-old diary account. Her daily, personal reflection on her resistance companions and their underground activities. As Grindle’s chronicle from the fictional imagination, this diary counterpoint to the Pallioti story lends grace and depth to what might’ve been simply a pleasant mystery.

By interweaving these two tales, over half a century apart, the novel deftly unlocks the dark heart of today’s Italian politics.

For as anyone who lives in Italy or follows the international media knows, Italian political parties define by their relation to the great Fascist-Communist divide marking the long ago world war here. Left-leaning partisans versus Nazi Fascist collaborators. During battle, passions burned, then struck fire with the official fall of Mussolini’s regime in April 1945. The fire’s fallout still forms and taints Italy’s current social landscape.

Soon after Trantemonte’s death, a second Florentine ex-partisan dies, in the south of Italy. Roberto Roblino’s murder bears the same MO. And his mouth is filled with salt.

Since Grindle’s current CV runs to “fantastic fiction” and a Florentine atmosphere novel (American-born, she lives in England), her practice pays off in this newest work. Clues and red herrings abound. The plot twists as quickly and unexpectedly as the narrow Florentine ways that Pallioti treads in his investigation. The supporting cast grows with each chapter.

Young, American, university professor Eleanor Sachs arrives in Florence to assist Pallioti’s inquiry. She’s seen the famous partisan award photo and believes one of the men in it may have been her naturalized-American, dead grandfather. Unfortunately, she’s not just another plot-complicating character. Grindle plays the market-targeting trick of building her as incipient love interest. Pallioti calls Eleanor “pretty as Audrey Hepburn.” “Even prettier.” A bad lapse for an author treating more serious business.

As in any well-devised mystery, we keep asking ourselves: Who are all these “helpers,” really? To this confusion, add the fact that Caterina refers to co-members of her cell in the only way allowed-by code names. So was Trantemonte one of them? Was Roblino? But how could they be the code-named “Il Corvo” or “Beppe,” if those men died long ago in Villa Triste?

With the aid of Caterina’s moving diary, Pallioti eventually solves his case. Of course.

Grindle’s history-through-contemporary mystery is a smart reversal of the historic mystery genre. And it’s spot-on about this bitter, complex peninsula, and its long-running political obsessions.