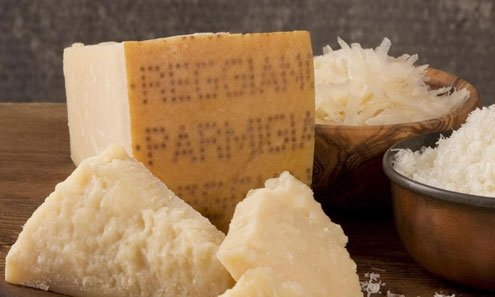 Parmigiano-Reggiano at its best is a solo treat.
M

ention Parma and most people understandably think of ham or cheese. Never mind the northern city’s architectural beauty or its favorite sons, including Giuseppe Verdi and Bernardo Bertolucci (and the entire Barilla pasta dynasty). Parma food is an art form unto itself.

The city and its surrounding areas host any number of prized gastronomic staples. Silky Prosciutto di Parma (Parma ham) is celebrated globally and rigorously produced. Culatello di Zibello is among Italy’s most highly sought charcuterie products. Sparkling red Lambrusco wine originated in vineyards around Parma. The town of Felino in the Parma province has a statue of a pig in its central square in homage to the town’s preeminent product: salami.

Parmesan is aged cow-milk cheese still produced according to an eight-century-old method with the same ingredients and techniques. It takes 160 liters of milk to make a single 80-pound wheel.

That said, not all grana is created equal. There’s Grana Padano and Parmigiano-Reggiano.

Both are made in the same way and in more or less the same area. They share a similar color, aroma and flavor. But they’re not identical. And the slight variation — regulated by official monitoring — makes all the difference.

Of the two, Grana Padano is less exacting. Preservatives and non-animal whey are permitted. The cattle feed isn’t necessarily natural. It must age nine months compared to Parmesan’s 12 months. The result is a mild cheese with a sugary flavor, a soft and crumbly texture, and a distinctively whitish-pale yellow color. Given its younger age and larger yield, Grana Padano is 40 percent cheaper than its counterpart.

Parmigiano-Reggiano is more like the Marines. Only skimmed milk from a single evening milking is allowed. Cows are fed only silage, high-moisture fodder. The minimum aging process is longer. Preservatives are forbidden. The result is a bolder flavor, nutty almost, and a more compact and velvety texture that has a melt-in-your-mouth quality. If aged beyond 30 months, Parmigiano-Reggiano naturally acquires a grainer texture and a piquant edge.

The best Parmesan is not “wasted” as a pasta accouterment but eaten alone, with pears, walnuts, white grapes, figs, brushed with honey, strewn with red onion chutney, or drizzled with slightly warmed balsamic vinegar.

Since it exalts the taste of wine, Parmesan is often served as a palate cleanser at tastings. Its nutrient-rich tableau makes it the first solid food for many Italian children. At some dinners and weddings, grana can even double as a serving pot. The top flat side of the wheel is sawed off and the drum thoroughly hollowed so that a receptacle of the bare crust remains. Steaming pasta can then be poured in the cavity and served from there, while the chiseled filling adorns the antipasto platter for casual nibbling.

The way most people enjoy Parmesan, however, is finely grated and dusted over any number of dishes. Traditionally, Parmesan tops pasta sauces, risotto, cold meat carpaccios, salads and soups.

A recent gourmet fad allows for grana with seafood (hence the appearance on menus of shellfish and bean soups generously sprinkled with cheese).

But a handful of preparations resist Parmesan. An elderly waiter at an Abruzzo mountain lodge where I once stayed refused to dust grana over my risotto with porcini mushrooms insisting it would smother the aroma and flavor of the funghi. He allowed only a delicate blizzard of freshly chopped parsley.

As a cook and a frequent restaurant patron, I think it’s a mistake to scatter Parmesan over spaghetti aglio, olio e peperoncino — a popular garlic, chili and olive oil pasta whose distinct flavor depends on those sharp ingredients. Many don’t share my views. Other dishes that resist an obligatory grated grana topping are pizza, smoked salmon, steak pizzaiola and cake.

There’s no strict etiquette as to how much Parmesan is enough. But piling it on you food at home doesn’t mean doing the same at a restaurant. Some establishments may frown at patrons for emptying the contents of a cheese dispenser on their portion of spaghetti. Waiters often vigilantly stare at clients with heavy formaggio hands to ensure measure is maintained. While table-container grana is commonly included in a small “cover” charge, management pays a higher price. Good quality, 24-month Parmigiano retails for as high as €30 a kilo (that’s about $35 for two lbs).

Sadly, supermarkets have blurred some of the old distinctions by offering perforated canisters of industrial Parmesan and pre-packed flakes or bagged morsels. Much of this is preservative-laced junk that standardizes (and warps) taste.

If you’re ever fortunate enough to get to Parma and its surrounding countryside (an area badly hurt by a 2012 earthquake), make it a point to visit a Parmesan factory along the flatlands of the Pianura Padana. Small producers will make you feel like family, show you around their plant, and give you free nibble. It’ll take you just one bite to understand that whatever you thought was Parmesan before wasn’t the real thing.