Parma: Notes From a Year in Serie A 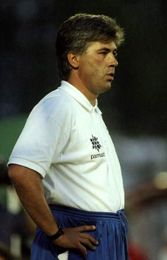 Ancelotti during his Parma stint.

ive Burke credit for forward thinking. In one paragraph he calls Walter Veltroni (now mayor of Rome and leftist bigwig) the “would-be Tony Blair of Italian politics,” a “non-hard core leftist, but a kind of radical chic, Bobby Kennedy figure.” Veltroni is also a Juventus fan — ahimè. This is a fine little book about soccer in Italy circa 1997, which now seems like a bygone era.

Burke, an American journalist who has lived in Italy since 1990, followed Parma (coached by Carlo Ancelotti and owned by Parmalat’s since-disgraced Tanzis) through the ’97-98 season. Burke gets great tidbits — Fabio Cannavaro started as a Napoli ball boy — and hints at storm clouds: Chapter 17 is titled: “Blame the Ref (You might be Right)”. When Ronaldo, playing for Inter, was denied an obvious goal against Juve he protested bitterly. But a louder voice prevailed. “Ronaldo missed a good opportunity to keep quiet; he’s learned Italy too quickly.”

The speaker? Luciano Moggi. Truth is stranger than fiction.