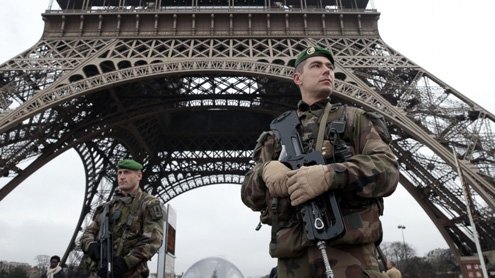 No war or intervention in war exists in a vacuum.
T

he 21st-century West is a largely affluent and safeguarded place. It hosts an admixture of civilizations that live as well or better than any people have at any time in human history. They possess food, shelter as well as devices that allow them to communicate and be entertained. Even those mired in relative poverty dwell in a day-to-day that many predecessors would envy. Western middle classes possess a freedom of daily choice and action that only lords and bishops once commanded.

For this reason, lest it withdraw into hysterical self-involvement, the West must reconsider the concept of consequences, if not adopt a doctrine. That doctrine would state a simple fact: No matter how removed a state is from its actions elsewhere, it will eventually face consequences of generated by it sworn enemies. It’s a simple but largely overlooked notion the free world prefers to leave unexamined until bloodshed and hyperbole wake it from its software coma.

Paris is now dealing with the aftermath of attacks that are the unnaturally natural outgrowth of its efforts to eradicate various extremist Islamic factions in a civil war that has embroiled both Syria and Iraq and covers a territory the size of France itself. Like the United States and Russia, France has chosen to fight “bad” revulsion with “good” revulsion in a brutal and sweeping conflict likely to go down as among this period’s deadliest. France’s recent role in championing secularism has been particularly pointed, with interventions in Mali as well as the more proximate Syrian involvement.

But there are at least two sides to every fight. Islamic fighters have so far largely avoided major Western reprisals, but lately they’ve been hit hard. They are outgunned and bombed from above, which beheadings cannot contest. This defenselessness can elicit and nourish false virtuousness. It is also a perfect invitation to vindictive responses intended to shock smug enemies. Civilians lost their immunity to consequences decades ago. In murky fights, and Syria is one such fight, they are the first targets of opportunity. A bomb probably destroyed a Russian airliner bound from Egypt to Moscow weeks ago, likely the fruit of the same poisoned tree.

A decade ago, both London and Madrid were targeted after throwing in their lot with the U.S. following the Sept. 11, 2001 terrorist attacks. Yet even the New York and Washington attacks, while popularized as the work of evil masters or bearded lunatics, were in fact part of an extreme paramilitary response intended to denounce cordial ties between the U.S. and the Saudi Arabian monarchy as well as its unwavering support for Israel, both contemptible acts as perceived by those seeking the improbable recreation of Islamic caliphates.

In his many 1990s warnings to the West, Osama bin-Laden harped on the words responsibility and consequence. The badness of deeds depended on perspective, he insisted. Righteousness was not de facto a Christian preserve. Redemption could work both ways. Let the score evening begin.

Like many of its predecessors, the Syrian civil war is a mélange of unmediated inhumanities. Drones, bombs and chemicals weapons are fodder. Factions fight among themselves. Slaughters compete for space while some are ignored entirely. Residents stream from the country headed for imagined safety, with many seeing France as a haven. This predictable migration has transmitted the conflict’s broader malaria to Europe, north to south.

Islamist commanders, some former members of the Iraqi and Syrian military, know that their only “defense” against European and American firepower is to occasionally foment death and disorder in major urban centers, since such attacks garner massive attention and produce outrage, which in turn brings some sense of satisfaction to those on the real front lines, where murder is fortifying oxygen.

Denouncing Parisian terrorist “binges” as mindless or barbarous is unrealistic. So is talk of “innocent” civilians. Europe is fully exposed to the spillover consequences of a conflict that involves millions of people in which casualties are a constant and three major global powers are actively using force. The U.S., following up on its ill-fated involvement in Iraq and Afghanistan, has vowed to assist Syria, though its military mission remains unclear. Russia, which faces Islamic unrest at its Asian edges and wants also to show off its might as part of a larger tussle with the West, has its own Syrian agenda built from old alliances. Multicultural but still secular France, as always wedded to the belief it remains a major global power, has also gone all in — or as all in as a nation can without committing troops.

And there’s the rub, at least as seen from the enemy perspective. When you can’t shoot down planes or array armies to meet the proxy forces assembled against you, what you can do is scare the easily panicked people in so-called “protected” cities. You can present them with consequences in the form of deliberate provocations intended to make pieces of their peaceable cities into war zones. You can frighten them into brief disarray, an anxious disarray whose toll on “innocents” they will immediately decry as senseless, inhumane, barbaric, which both in and out of context it is — if only context didn’t matter, but it does.

Terrorism is a kind of override button. It is the conferring of consequences (and victim status) to places that would otherwise feel immune from them, since a specific part of Western entitlement is the right to security. Shock and outrage follow, as does resentment. But the deeper sickness is Syria and its war, and war can’t be arbitrarily severed from those involved in it. The malady of hostility is duty-bound to spread, with Western cities now and forever an inviting host to that which they most fear.