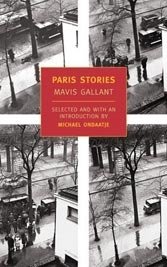 Canadian author Mavis Gallant is not simply a master of the short story; she is also its advocate. “Stories are not chapters of novels,” she writes in the afterward. “They should not be read one after another, as if they were meant to follow along. Read one. Shut the book. Read something else. Come back later. Stories can wait.” Readers should heed her advice. Her stories do not aspire to become novels or to substitute for them. They stand alone as deeply textured and fully resolved works.

“Paris Stories” are named not for their setting but for the city where Gallant has lived and written for more than half-a-century. This collection tells of the convulsive 20th century through the lives of minor characters found in failing art galleries, forgotten hotels and worn neighborhood restaurants across Europe. These men and women are outsiders, and though caught in the tangle of events reported in newsreels and newspapers and later on CNN, they appear in society’s peripheral vision. They are also survivors — keen appraisers of what circumstances have served up, calculating in their response.

Gallant makes familiar companions of them, tracing their subtle routines and the consequences — often devastating — of even slight emotional compass shifts.

Careful observation is vital: a woman’s habit of dress, the clink of tableware in the next apartment, the subterranean tremors in a marriage are quietly significant. Gallant’s deliberate and considered sentences, though full of novelistic detail, maintain the short story’s discipline and economy. Singular images linger: the ambition in a Schiaparelli dress; blue and white striped awnings unfurled into the Mediterranean sun, promising privileged leisure; a woman wandering the sullen emptiness of Paris in August.

In the afterward, Gallant looks back to the start of her career when she left Montreal and a reliable job in journalism to write fiction in Paris. She refused a safety net and gave herself two years. On writing, she quotes Georges Bernanos, who once said the writing process is “like rowing a boat out to sea: The shoreline disappears, it is too late to turn back, and one becomes a galley slave.” By losing sight of the water’s edge Gallant evokes the lives of others who are similarly unmoored.

About the Author: Paula Bruening