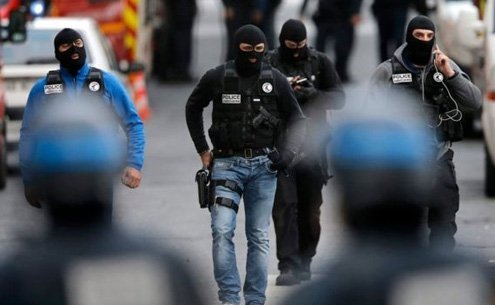 Police agents don masks to seek out suspects and suddenly come to look like suspects themselves.
T

he phrase “preemptive alarmism” needs 21st-century coining. Preemptive alarmism is when a French prime minister publicly says Paris might be vulnerable to chemical or biological attacks. Or when an Italian official (via American intelligence) suggests that terrorists could target St. Peter’s Basilica.

True enough on both counts. Large cities have been at risk for years, natural targets in a global war managed by fringe groups dependent on civilian disruption.

Yet this Cassandra-like agitation has less to do with civic concern than political defending against a “we told you so!” worst. Mass media circulate prête-à-porte admonishments while marketing a siege mentality. Physical terror is transformed into psychological terror, insidious but potent.

Preemptive alarmism jolts the mental immune system of the impressionable, creating layers of pressurized doubt that undermine work, relationships and the basic protocols of daily life. Virtual reality is rammed up against fecund imaginations and married to recent footage of corpses and flames. Police agents don masks to seek out suspects and suddenly look like suspects, adding layers of ambiguity. Those vulnerable to fretting — “worried sick” comes to mind — sense the ominous in all things. Security tightening enhances trepidation. Put another way, “present” distress is packaged to include a “future” dire — two birds with one stone — inadvertently creating a seditious union of Calvinist inexorableness and 1950s-style nuclear anxiety. The result is a spiritual malady with the melodramatic symptoms of Munchausen’s syndrome, in which fact and fiction entwine.

There’s no arguing for a return of the stiff upper lip days of the Battle of Britain. Sipping tea to vex Nazi air terror doesn’t suit a time of drones. Yet common sense is wavering. Terrorism has less to do with death tolls and devastation than working to distract and unsettle populations. Its effectiveness is measured through disproportionate attention as manifest through knee-jerk mourning, manufactured solidarity and inchoate rage. To terrorist planners, the ability to assemble macabre and high-strung human tapestries at a moment’s notice makes incidental murder (and the sacrificing of suicidal pawns) highly inviting.

Generalized disquiet spreads, helplessness with it. Many see the worst as yet to come. Topics of conversation use the latest terrible act as a springboard. Even sex can seem unappetizing, trivial. Some people, overwhelmed or weary, tune out. It’s broadband subversion.

The evolution and facilitation of this process is as terrifying as terrorism itself. Preemptive alarmism has come to challenge the mental health of an already neurotic society. Personal depression uses bad news to “improve” its downward obsessions. The present borrows from what lies in wait, undoing critical thinking and limiting mental escape hatches.

Israel’s ongoing response to terrorism is an instructive alternative. Greater and lesser attacks are met with the same meticulous steps: cleaning up the mess, hosing away the detritus, burying the dead, and getting on with life. Next come government reprisals, some ferocious. But popular response is largely limited in fanfare and outrage, lest terrorist practitioners take heart. Life is reshaped to normal as swiftly as possible with an English-style mulishness intended to show attackers they’re unlikely to get a rise out of a citizenry that resists both provocation and self-pity. On war footing since 1947, Israel rarely dwells long on its losses. Such dwelling, it knows, would burden the already burdened, most of who know they’ve chosen to live in a state many hate and always will. Grit is built in by necessity.

The post-9/11 West exhibits the opposite of grit. Dire warnings are entertainment. Rhetoric flourishes. Mourning is rehashed. Responsible news outlets put fearsome footage on a loop. Alerts flow, as if to refresh the collective dread. Emotional audiences are mesmerized.

It isn’t about updating news or informed broadcasting. It’s more like rolling out a welcome mat to meet and greet the fear Franklin Roosevelt deplored in his “You have nothing to fear but fear itself…” inaugural address. FDR recognized the weight of the economic and psychological depression in the United States of 1932. His defiance introduced pride in a business-as-usual toughness that eventually helped make dread seem less dreadful. Unfazed was the word.

Few imitate him now. Few bravely turn down the volume when turning it up is so natural. FDR’s comment’s 100 years on might read more like, “Fear itself is what you have to look forward, so get used to it.” Fear-mongers live in blandness, from warning to warning, unable to snap out of a pattern of preventive alarmism that continues to do as much harm as the acts against which the alarm is intended gird.