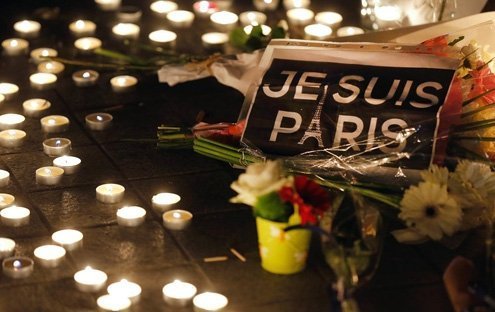 Getting on with things might be better than emotionally-driven solidarity efforts.
I

n the 36 months after the Sept. 11, 2001 terrorist acts, American mass media all but lost its wits, and with it the U.S. executive branch and the country’s terrified citizenry. America cities were seen as under imminent threat, soon to be hit by savage attacks. Hysteria reigned, as did the alarmism built into color-coded alerts. Repressive acts were passed. Those behind the terrorist acts — at the time Al Qaeda — were portrayed as monolithic adversaries that could be contained only through untraditional warfare. Torture was sanctioned. Emotional sensationalism extended contagion-style to Europe (one Time magazine cover in 2004 asked, “Who’s Next?”) The War on Terror was created. Afghanistan was bombed and invaded, and soon after, under dubious pretext, Iraq.

Both missions ended badly. Only several years later, after the flawed Iraq intervention, did critical minds begin to question both the motives of that fight and the catch-call pretexts applied to terrorism. In his 2004 presidential campaign, now-Secretary of State John Kerry recommended terrorism be examined in criminal terms, like the Mafia or Al Capone. He was shouted down as an appeaser.

Despite years of domestic anxiety and alarm — their own form of terror — the imagined American siege never materialized. Greater vigilance helped. But not as much as the exaggerating of menace that finally had nowhere to go. Al Qaeda and its brethren simply lacked the tools to duplicate the perfect storm of Sept. 11, a tactical stroke of evil genius helped by luck. A nation that loathes surprises was taken by surprise.

Al Qaeda did stage terrorist attacks in Madrid (2004) and London (2005), but they were pocket change compared to official scenarios. The group was later able to find openings only in more loosely guarded Asia. By 2010 the terror threat as delineated in the wake of the 2001 attacks seemed to have succeeded only in creating a culture of national paralysis tied to fear. Mass media in particular had become addicted to its pursuit as a form of self-induced narcosis.

This brings us to 2015, and Paris. So far, France’s public response has been disappointingly in line with the American hysteria Europe found so objectionable after 9/11, with ISIS playing the part of Al Qaeda. ISIS is a militarized aggregate of Islamic radicals who in recent years have seized control of parts of Iraq and civil war-torn Syria while saying they seek the making of caliphate its leaders hope will ultimately include Europe.

Al Qaeda pledged to punish Western infidels and bring heathen nations to heal. ISIS’ aims are just as blustery, but perhaps even more impracticable. Moderate Islam far outstrips radical Islam (just as the Christian right remains a minority). Multi-cultural integration, while choppy, is part of day-to-day life in most Western states. ISIS, like Al Qaeda, depends on spasms and lurches to maintain recruits and notoriety.

Yet France — parroting the only terror response it knows, America’s — has chosen to portray ISIS in 2001 terms, as an enemy with emphatic mass potential. The Paris attacks, in line with 9/11, have been labeled an “act of war.”

In truth, paramilitary ISIS is inconsistent. It has yet to lay claim on Syrian supremacy and controls largely sparse and rugged desert territory containing a few midsized cities. This non-state state has no economy to speak of and no unifying sense of “self” aside from an allegiance to Islamic law and an appetite for headline-making acts of brutality. It is a thorn, not a goliath. Its spectacular willingness to kill coupled with online reach (beheadings as a mini-series) makes it appear more intimidating than it is. Containing and dismantling it will in fact require no-nonsense resistance. It will also require a cap on institutional hyperbole, since the group relies on rhetoric to keep it in the limelight and attract religious zealots and rebels without causes.

Fifteen years after the twin towers, the European (and Russian) West should know have known better than to serve terrorists a main course of the kind of loud, blunt, fisticuffs-laden responses on which they feast. These are organizations that grow in stature relative to their enemies’ public agitation. In the 1960s and 70, urban terrorists eagerly hoped European states would fortify police and enact repressive measures to help give Marxist groups the credibility they needed. They petered out because Europe refused the bait, failing to don the expected Fascist mantle.

These days, bait is swallowed with glee. The Paris attack has not only triggered retaliation (with the threat of more) but also regenerated American-style doomsday warnings about the future of hard-earned postwar democracy — as if that democracy were shallow and fragile, on the verge of withering, which it isn’t.

What crippled Al Qaeda was the severing of its money supply and the ostracizing of host states. What can most undermine ISIS is a negotiated halt to Syrian hostilities, even under the terms of a precarious deal. Ongoing military action only emboldens ISIS, which knows only to fight and hector.

Finally, the only true part of the American War on Terror marketing campaign regarded its length. It would be long-haul effort, said then-President George W. Bush. But length is longer an appropriate yardstick. Terrorism is likely to remain a constant in a historical period — this one — that has moved from world war into a domain of small-scale, unconventional acts of disruption intended above all to give already neurotic city-dwellers pause about their security and future. It is psychological warfare crafted by highly organized thugs who will ultimately rule no one and no state but can interfere at will. For that reason, terrorism should be prevented from generating the kind of narcotic agitation it did in the United States, agitation that evolved into a corrosive and corrupting dependency, squaring an awful circle. Grand acts of solidarity may matter less than simply getting on with the day to day.