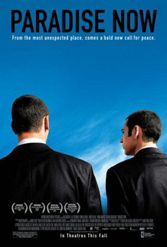 According to Muslim tradition, martyrs enter paradise after being picked up by angels. But what about those left behind — families, friends, fiancés? Is martyrdom’s allure good enough for them?

In Hany Abu-Assad’s heady film, Palestinians Said (Kais Nashef) and Khaled (Ali Suliman) are coworkers in Nablus in the occupied West Bank They despise Israeli soldiers, roadblocks, and ID checks. Chosen for a suicide mission in Tel Aviv, they confidently tape a farewell to their parents, cut their hair and beards, cleanse their bodies. Explosives and detonators are concealed beneath dark suits. Then comes a sumptuous meal.

But border things unravel at a border crossing. Gunfire erupts. Panicked, the men run for cover. Split up, explosives still wrapped around their bodies, they’re forced to regroup and survive. To chronicle the madness of a region, Nazareth-born Abu-Assad uses the ordeal of two men forced to reckon with the consequences of their choices.

Reason, such as it is, belongs to Suha (Luba Azabal) — a French-educated friend of Said and the daughter of a Palestinian martyr. Asked about her martyred father, she says “I’d prefer that he still be alive than be proud of him.” And later: “It’s all so absurd. Three million people killing one another to try and stay alive.”

Can you stop violence with violence? In dealing with the question, Abu-Assad remains impartial.