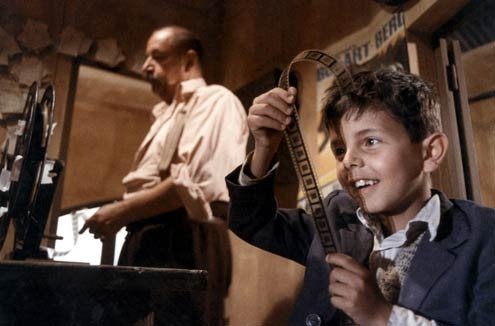 hen director Giuseppe Tornatore schemed a sentimental remembrance of his small-town Sicilian childhood he essentially put a tombstone on Italy’s already languishing neorealist movement. Riffing on “Amarcord,” Federico Fellini’s panoramic imagining of a pre-war Rimini, Tornatore used his movie-loving adolescence to create “Nuovo Cinema Paradiso,” a Hollywood-style tearjerker that in 1988 permanently sidelined the hard knocks visuals of Vittorio de Sica, Roberto Rossellini and Luchino Visconti among non-movie buffs. “Paradiso” instead portrayed Italy in the languorous terms non-Italians wanted so much to associate with Latin coming of age. There’s a case to be made that Italian filmmaking never recovered from Tornatore’s wildly successful trip down memory lane. A host of political and Mafia-driven films never made A-list distribution as exporters chose to await the next “Paradiso.” Eventually, Tornatore became a victim of his own “nostalgia-geist”; he’d never make another popular hit.

As demoralizing as the story is for a still-troubled Italian film industry, there’s no denying “Paradiso’s” lyric charm. Frenchman Philippe Noiret, among the best actors of his generation, is Alfredo, the diligent projectionist at Nuovo Cinema Paradiso (New Paradise Cinema) of the mid-1950s (Tornatore was born in deeply Catholic Bagheria in 1956; he calls his fictional town Giancaldo). Young Salvatore (“Toto”) — introduced in flashbacks — idolizes Alfredo and watches him wrestles with the bulky projector and excise kissing scenes at the behest of the town priest. Grouchy Alfredo gradually makes Salvatore into an apprentice.

Tornatore affectionately elicits the provincial movie halls of the era. They were saloons and meeting places. Audiences talked to one another and even to characters. Unable to see a kiss on screen, they furtively kissed partners. The cinema is paean to plenitude of village life with the projectionist as the imagined master of ceremonies.

Tornatore opens with adult Salvatore — a film producer — returning home for Alfredo’s funeral, opening the door to long flashbacks. The underlying bittersweetness presages Tornatore’s later harping on portent and gloom in “l’Uomo delle Stelle” (1995) and “Malèna” (2000), which launched the sensuous side of Monica Bellucci’s career.

“Paradiso,” by contrast, is a sweet and mischievous vignette. At the end of the film, the adult Salvatore finds a reel that Alfredo compiled for him in secret. It’s the 20 years of censored kisses, a sob-making scene that overwhelms contrivance.

It’s worth noting that “Paradiso” was later re-released years with extensive restored footage about Salvatore’s coming of age. Luckily for Tornatore, this weepy and weak midsection never made it into the original.

While Tornatore was making a b-line for the 1950s, many of his contemporaries were trying to cope with the aftermath of 1970s urban terrorism, with dubious success. Though period generated a number of earnest films (the 1978 Red Brigades kidnapping of Aldo Moro is a favorite subject) most are marred by the political interference. An exception is Mimmo Calopresti’s 1995 “La Seconda Volta,” a film about terrorism and its consequences that focuses instead on human detritus.

By chance, Turin college professor Alberto Sajevo (Nanni Moretti) sees the face of woman — Lisa Venturi (Valeria Bruni Tedeschi) — he’s certain he recognizes. He circles around her for days. They meet over lunch and talk awkwardly, lying about each other’s names. She’s a secretary by day but says no more. He’s just as circumspect. But Sajevo senses that she’s the same woman who gunned him down as part of a terrorist attack 12 years before. The bullet is still lodged in his brain.

Sajevo, whose marriage is in tatters, still can’t digest or excuse the attack. Venturi, alienated from normalcy and on daytime work release from a woman’s prison (she’s serving a 30-year term), has distanced herself from the crime and won’t be coerced into ethical accountability. For her, it’s a part of the distant past.

Calopresti plays out his psychological thriller like an ominous game of chess. Moretti dispenses with his usual political self-indulgence to mold his Sajevo into a menacing but helpless man who’s run out of answers. The superlative Bruni Tedeschi projects dimness and fury with equal aplomb.

La seconda volta literally means “the second time,” but can also be interpreted to mean “the second face.” Both Sajevo and Venturi are injured and struggling with post-modern irrelevance. This is a rare movie about terrorism that focuses on unhealed scars and their consequences.