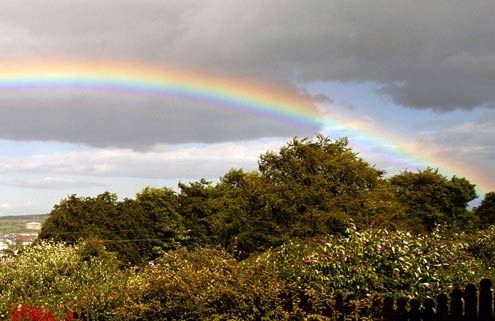 A glorious, spectacular rainbow materialized from nowhere. It spanned the entire sky over the Po valley...
T

he train was packed. People even stood in the center aisle and sat on suitcases. They grumbled as we rolled over the flat countryside. It was very hot.

I sat in the one seat that, strangely, remained empty. It was beside that of a large African woman. Her kinky hair, braided and wound around her head, looked like a hat that could be lifted off and hung on a rack. She wore thick red lipstick, and necklaces and pins that glittered in the sunlight and clinked. She didn’t open her eyes. Her fat arm hung over the arm rest. Her thigh edged onto my seat.

On the floor between her legs, plastic grocery bags overflowed — wads of clothing, cans of food and small cardboard boxes held together with cellophane tape. In spite of the heat, she wore a brown wool cape trimmed with fake fur, matted like a stray cat’s. The nylon lining leaked through a long tear. The woman’s dark brown skin glistened; she smelled like old sweat and sour clothing.

Her heavy legs protruded from under a tight, stained skirt. Her bare feet rested on the seat in front of her so that, in spite of the crowd, she occupied two seats. Long, unclean heels, of an ashy violet color, flaked dry skin onto the upholstery. Dark red toenails, overgrown, had cracked into odd shapes and were displayed there like a row of trinkets.

She must have sensed me staring. She shifted in her seat and scowled. I looked past her out the window. Although the sun was shining, the whole expanse of sky had turned slate gray.

People began closing windows. A man behind me reached over the African woman. He pushed her window up a little and then slammed it all the way to the top. Italians nodded approval and other windows went up.

The air immediately reeked. Fortunately, one window ahead of us remained open. An elderly lady in the seat facing me rubbed her neck and glowered at the open window. The teenagers sitting there ignored her. She stood up and tried to enlist the support of other passengers. “That wind is dangerous, especially on your head.” She looked to me for agreement but I smiled into the breeze, letting my hair blow. Huffing and mumbling, she left the car.

I moved into her seat. Finally, an arm rest and space to breathe! The African’s eyelids slowly lifted. I squinted at my book. The sun was glaring into my eyes, making them water. I began to sweat. I couldn’t feel any breeze. How could that lady complain? It was hot here. I returned to my former seat. The African woman didn’t move one centimeter to accommodate me. Our hips touched. Our arms touched.

A conductor entered the car, followed by the old lady.

“I’m going to close this window,” he said. “This wind is bothering many people.”

“Not everyone is bothered by wind.” I spoke the words clearly. Everyone looked at me. Someone said, “There are so many foreigners on this train, you hardly know what country you’re in.”

The conductor snapped shut the last window. He said, “We don’t want people getting stiff necks.” The old woman took her seat, nodding to the other passengers as though they were her applauding public. I breathed through my mouth and watched the broad expanse of Piedmontese landscape — lush fields and prosperous dwellings marred by piles of rubbish, rusted machinery and dilapidated warehouses. The sky blackened in eerie sunlight. I waited to see lightening flashes.

Instead, a glorious, spectacular rainbow materialized from nowhere. It spanned the entire sky over the Po valley, touching ground in the far distance through the left window and touching ground again through the right. It seemed solid and was colored like the brilliant rainbows children paint. It cut the whole world in half; below it the sky was black; above it, pale. It was echoed by a second, weaker rainbow and, above that, a third.

Noise dropped to a hush.

The African’s eyes remained shut. I gently nudged her arm and pointed. She grunted in irritation. I hated for her to miss it and nudged her again. This time her gaze followed my pointed finger and she looked outside. Then she looked at me.

Her face opened into an enormous smile. She was a young and pretty, like my own daughter, with great black eyes and beautiful teeth. Her face showed gratitude. She whispered to me in English, “It is from God.” For a few seconds we were sisters, in league together, pappa e ciccia, innocent.