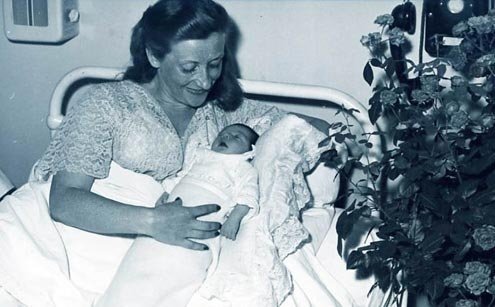 Mother and papoose.
I

was born papoose; a chunk of flab soon cottoned into a husk of white. My tiny splayed hands looked like the overbite of an extinct creature. Why anyone would smile at such a thing I don’t know. Alarmed at the flattery, I squealed constantly. Or so I was later told.

Black and white photos ignore time. An infant in a bed stays that way forever. There’s no Facebook timeline to trigger the sentimental imagination or transform baby cooing into an act of sharing.

I found my infant shots by chance. I was looking instead for pictures of a woman I once loved taken at a resort we visited before she told me she’d made a mistake and vanished. Seemingly impregnable men are vulnerable to old sirens. The past is maternal. Why isn’t clear.

Maybe to allow those who delve into it to uncover not girlfriend photos but those of a mother and her baby in a Paris clinic a decade before the advent of Kodachrome.

I’d been told of the existence of old family photos but I never knew their contents. Were they family shots, images of my mother’s truncated family life in the highs and lows of pre-war Poland? I assumed so. What I didn’t imagine was what I found.

But there I was, in a yellowing sheaf, my papoose version in two photos with nothing written on the back and showing a beautiful new mother beside flowers and hooked-receiver phone from another era. Who took them I don’t know. My father had fled the city to avoid the clinic. Fatherhood terrified him. He was nearly 60.

I knew little of my early days, except a few anecdotes about nannies and my tendency to bay and howl, so much so that I once caused great nighttime havoc aboard a train headed for the Jura Mountains. Apparently I wouldn’t stop screaming. My lungs were tiny bellows in service of a displeasure no one aboard could understand, led alone cure me of. My father was eventually told that unless he brought his creature under control the train would be stopped and the papoose expelled, along with its owners. Somehow I was calmed. Or fell asleep.

Our visit to Italy in early 1956 coincided with the worst winter of the century, heaps of snow from north to south. In Rome I was allowed to crawl on the ice, an indulgence extended to keep the howling at bay. All feared I’d start again.

When my papoose hands grew bigger I learned to crawl first on the balcony and then the terrace, finally becoming entirely upright, which I vaguely remember as the dawning of an unwanted other world, the comforts of the horizontal eventually replaced by the responsibilities of the vertical.

My father took me to the Rome zoo, hoping to make it as far as the reptile house. He thought smaller, less vocal reptiles would be less likely to induce my yell. Instead I met a goat near an enclosure and caused a public disturbance. The goat, like my later girlfriend, finally walked away.

When I met my mother after a decade-long absence in the early 1970s she added her own stories to my youth’s carnival mix. You made extraordinary noises, she told me. Like animals and machines and people all together. You were like three kinds of child.

The wording fascinated me. Three kinds of child.

Parents gone, the past becomes the sum of friendly and less friendly tidbits. Blanks are filled in by vivid if biased memory. The two conspire to keep mortality at bay. Take your doubts to the dying, who often subsist on spilling memories alone.

Today’s youth, when it ages, will have it both easier and harder. Whole lifetimes will be mundanely colored with infinite incidentals. Three-kind-of-child memory will be corrected or contradicted by sure-footed timelines and videos intolerant toward make-believe. Imagination will have less oxygen.

In that sense I choose to recognize myself in anachronism. I like myself as a rigid papoose swathed in a flute of cloth and parked near my maternal banana, the mini-me ready to squeal at will, no doubt already rehearsing for its star turn ahead, when I would nearly stop a whole great train, and wake the Rhineland Alps from their slumber.