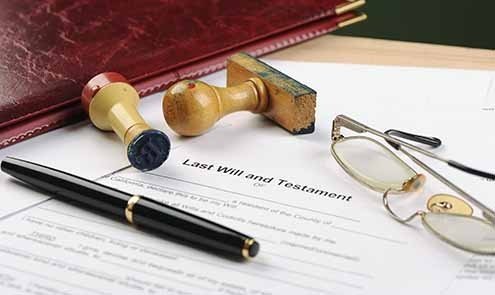 Pledges and promises will get you nowhere if you're not written down.
T

he reserved young man who entered my office appeared shaken. His name was Carmine and he sat down and began speaking soberly of his father, a widower who had lived in New York and had just been found dead in an apparent murder. His will had been read by the oldest of his three sisters soon after she’d found the man’s body in front of a smoldering fireplace, a hot and bloodied poker laying nearby.

So it was that Carmine learned that his father had not provided for him in his will, instead dividing his Long Island estate between his siblings, all of who lived in towns near their father.

Carmine pulled a faded letter out of his worn leather bag. “My father promised he’d leave me funds to care for my sick child. He told me that in a call and then this…” He handed me the letter. His father had indeed promised him $50,000. “He wasn’t happy that I returned to Italy,” he continued, “but this is difficult to take. Is there anything that can be done?”

The story of the Zio in America — the American uncle — who welshes on a well- intentioned promise of a postmortem gift to his family in Italy is all too common. Sadly, the omitted person has few options. When suspect circumstances surround the execution of a will, legal action for fraud or undue influence is possible — though evidentiary hurdles are difficult to overcome. But if a will is valid and unambiguous, action taken on the basis of being omitted is close to impossible to win.

The reason is the Parol Evidence Rule.

That rule elevates a written instrument of final intent to legally sacred ground. It bars anyone from presenting extrinsic — or outside — verbal or written evidence that might impose ambiguity or add “clarifications” to the will.

The rule’s common law roots originated in the Middle Ages when documents began replacing an oral system in which witnesses proved the validity of transactions. It also reflected the rise of writing, and literacy. With it came the custom of stamping and sealing to confer a document with indisputable authenticity.

In 1591, one English court, while attempting to judge a succession case, objected to “collateral averments out of the will,” making it clear that the oral age of competing witnesses was on its way out. The court sought evidence of a “higher nature.”

The logic was simple: if carefully drafted, a will would serve as a final expression of intent, superseding all prior understandings and excluding all other evidence. The rule exists in both the United States and Italy, though applied differently in each country.

“But isn’t there some value in my father’s letter?” Carmine asked. “I don’t trust my sisters, not a one.”

I told Carmine that in the email era, with so many contractual agreements being carried out through electronic communications, the rule was beginning to break down in the commercial sector.

When it came to wills, the rule did provide for exceptions, but only when the wording was ambiguous or the will incomplete. In that case extrinsic evidence, oral or written, would be accepted to clarify and complete the document. What wouldn’t be allowed was evidence that complimented or contradicted the contents of the will itself.

Courts often apply a “four corners” rule, I told him. If all necessary information is contained in the document, the inquiry stops then and there. All the legal bases are covered.

I recommended that Carmine get a copy of the will. Different states have different rules. In New York, for example, a holographic (hand written) will is invalid unless made by someone in the military. To be valid, his father’s will had to have been signed and dated by his father and witnessed by two disinterested witnesses.

There were other aspects to verify to determine the will’s validity. For example, was there a witness affidavit made at the time of his father signed the will or shortly after declaring that he knew he what he was signing, was doing so voluntarily, and wanted the witnesses to acknowledge its execution?

Hope yes, I told him, though it’s rare a will is found to be invalid. We needed to work with the Surrogate’s Court in New York, the court with jurisdiction over estate matters, to find out more.

“Good,” Carmine said. “But first we need to find out who murdered my father.”