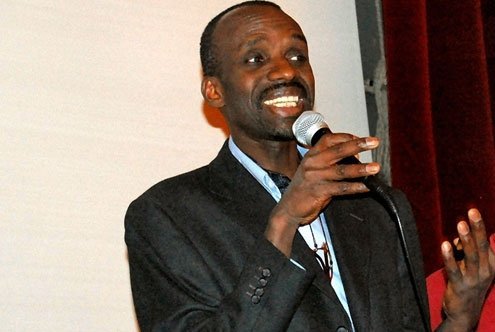 Khouma, who touched down in Rome in 1984, now lives in Milan.

Long before Asian and African immigrants targeted Italy as a preferred European point of entry, a 27-year-old Senegalese named Pap Khouma dreamed of leaving Dakar behind and making a life for himself in West Germany. The path north led through Italy, where Khouma touched down in 1984, beginning what he recalled as a “long and painful via crucis.” With Cold War-era authorities focused on movement between east and west, entering porous Italy from the south — through Rome — was usually easy.

A stranger in a strange land, Khouma befriended Italian-based Senegalese, most of them street hawkers who comprised the first wave of African vendors in what remains a thriving street scene. At the time, legislation against illegal aliens was only haphazardly enforced. Khouma and his African friends sold icons in the streets of cities throughout central and northern Italy while living out of cars or in dilapidated apartments. Most Italians called the vendors “Vu cumpras” (“You buy”), jargon that mimicked the sound of their sales pitch.

When Khouma was unable to enter West Germany and a short stay in France proved disastrous (even the Foreign Legion turned him down), he moved back to Italy, shifting between Milan and the Adriatic coast while eluding a string of early deportation orders. A brief return to Senegal didn’t last and Khouma settled in Milan.

After the fall of the Berlin Wall, immigrant numbers rose dramatically and the Italian government began drafting stricter legislation to limit the influx. The Northern League (Lega Nord), which emerged as a leading political force in the mid-1990s, made resistance to immigration a hallmark of its platform — “the most xenophobic political party in Italy,” Khouma calls it.

The Lega Nord governed Italy in tandem with the center-right People of Freedom through the end of 2011, when Italy’s economic woes forced a change in the political landscape. In 2009, then-Prime Minister Silvio Berlusconi insisted a multi-ethnic Italy was “not our idea” of the country’s future, attributing such a preference to leftists.

In 1990, Khouma published his first book, the novel “Io venditore di elefanti,” which 20 years later was translated into English by the University of Indiana press as “I Was An Elephant Salesman.” In it, he described his early vagabonding days. In 2005, he followed up with “Nonno Dio e gli spiriti danzanti” (“Grandfather God and the Dancing Sprits”), a novel about an immigrant who returns to his homeland after a long absence. His third book, “Noi neri Italiani” (“We Black Italians”), was released in 2011 and recounts obscure stories and anecdotes about blacks in Italian history.

Khouma, now a naturalized Italian citizen, has spent the last two decades writing and lecturing about the immigrant experience and the challenges Italy faces in the decades to come. He has also assisted local and international NGOs in attempting to understand the Italian immigrant experience. In 2004, he helped found “El Ghibili,” an online magazine dedicated to writings produced by migrants.

Khouma discussed immigration and life in Italy in an email exchange with Katie McGovern. Here are excerpts from their correspondence.

Is family or upbringing at the root of racial prejudice?

Unfortunately, when they’re young, humans are implanted, maybe not consciously, with the seed of ethnocentricism. Some control their xenophobic instincts and live together with those that are different. Others are racist, maybe because of identity crises or because of economic or power issues. It’s hard to admit, but no race, black or white, is immune to racism.

I didn’t like it, even if it is a noble profession, but I didn’t have other work options. Being illegal in Italy in the 1980s meant not having basic rights: It was impossible to find work, rent an apartment, have health care, and travel to other European countries. To survive, we Senegalese had the illegal jobs of selling artifacts on the beach in the summer. We sold wooden elephants, African masks, leather bags and other trinkets. People bought, maybe out of compassion, or perhaps because the goods were exotic and inexpensive.

How difficult was daily life?

Both in Italy and in France we were subjected to frequent police checks, arrests, humiliation, and jail time. Italian authorities threatened with expulsion within 48 hours, demanding we pay our own way. It was difficult to comply, since the police seized all of our goods and then they made us pay a fine.

Often the authorities took whatever we had in our pockets. We didn’t dare object for fear of aggravating things. It wasn’t a good idea for an illegal immigrant and illegal salesman to protest. Sometimes we were able to cross the French or German borders, but the conditions there were only worse. It was like jumping out of the frying pan and into the fire.

Why did you pick West Germany as your first destination?

A fortuneteller in Senegal told me that my destiny was to live in Germany. When I was couldn’t stay on in France, I tried to follow his advice, but I was kicked out by German police at the border near Strasbourg.

I went back to Germany twice, 25 years later, in 2010. Those times I was invited by the University of Wurzburg and the Institute of Italian Culture in Hanover to introduce my latest book. My son and I also stopped by Berlin. The Germany that I saw seemed like an open-minded country where, at least in big cities, different ethnicities lived together and accepted each other. Berlin is becoming one of the most cosmopolitan cities in Europe.

You mentioned that there is no shame in being a salesman. Do you still sell?

After many years of anguish, I finally became a legal immigrant. I stopped selling. I have been a manual worker, a delivery boy, a cultural mediator, an interpreter in court, a teacher, a political activist, a journalist and a librarian.

Has Italian citizenship altered perception of you?

I am an Italian citizen, but only on paper. In fact, many public authorities express disdain when I show my identity card that states “Italian citizen.” Even in 2011, a black Italian citizen is not easily accepted. When I go to France or Spain, the police sometimes detain me and ask offensive questions, just because I am black and have an Italian identity card. I have lived in Europe for 27 years, but I am still afraid of being stopped and humiliated every time I meet a white policeman, whether I am walking down the street or on the metro by myself or with my son.

How has the Senegalese community in Italy evolved since you first arrived?

In the 1980s it was mostly young men. Now many family members have joined them, new families created, and children born who go to Italian schools.

Television has boomed since the 1980s. How does Italian TV in general handle racial matters?

When terrible crimes occur, the press tends to blame immigrants. For example, the famous 2001 double homicide of Novi Ligure, in which a mother and son were murdered, led to the arrest of an Albanian who was jailed and lynched in the media. In the end, the daughter and her boyfriend, both Italians, were charged with the crime.

In 2006, in the town of Erba, three women and a two-year-old boy were murdered. The media focused on a Tunisian, who was the husband and father of two of the victims, even though he was in Tunisia at the time of the crime. The killers turned out to be the Italian neighbors.

When a 13-year-old Bergamo girl named Yara Gambirasio disappeared in November 2010, a young Moroccan was arrested while on a ferry leaving Genoa. The police later said it was a misunderstanding.

In these cases, and in many others, the Lega Nord prepared banners and organized demonstrations against foreigners. The Italian press in general doesn’t help Italians accept foreigners. You just need to read the newspaper, listen to the radio, or watch TV to notice the vocabulary that is used to construct a negative image of immigrants, especially Africans, Muslims, and Romanians. Fortunately, many Italians think with their own heads and aren’t swayed by racist behavior.

What made you turn to writing?

Even today, in Italian history books, superficial interpretations regarding Africans, filled with misconception and scorn, are common. Our children use these books, because they are studying in Italian schools.

You came to Italy in 1984. What would you advise an immigrant planning the leap now?

Before starting, learn at least rudimentary Italian, or the language of your destination country. I would also stress that the streets of Italy are not paved with gold, as many Africans continue to believe. Italy is rich compared to southern nations, but it is it currently is suffering through the economic crisis. Work opportunities are limited, and both Italians and foreigners with work experience are unemployed. Meanwhile, Italians, especially young graduates, continue migrating to Northern Europe, the United States, Canada, Australia, and China.

What advice would you give Italians?

To accept the presence of foreigners as normal. To consider as normal members of their own population they might find unusual: black Italians, Asian Italians, Indians, mulattos, Muslims, Hindus, Italians with Arabic names, Brazilians, Russians, Filipinos.

Large countries, such as the United States and Canada, are fortunate to be able to welcome populations from diverse ethnicities and religions, allow them to live together, and let them confront and resolve their inevitable conflicts. These countries offer an institutional guarantee and work opportunities based on a meritocracy rather than on ethnic origin.