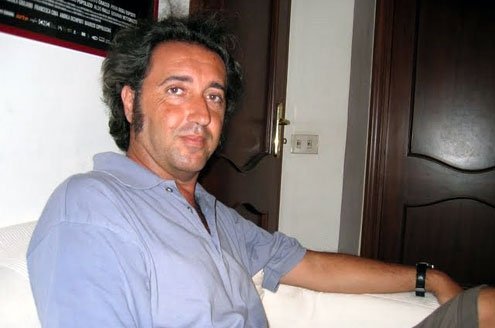 Paolo Sorrentino in his office. Photo by Katie McGovern.

On a hot August afternoon, film director Paolo Sorrentino sits behind a massive desk in the Rome offices of Indigo Films as a secretary offers up a steaming espresso and two bottles of mineral water. An air conditioner hums tunelessly in the window, blocking out all sunlight.

Generally considered among Italy’s leading young filmmakers, the Neapolitan-born Sorrentino began his career as a screenwriter. His first feature film, “L’Uomo in più” (2001), tracked the life of fading pop singer and a bedraggled soccer player who share identical names. It got rave reviews but little public attention. Two more bittersweet films followed, “Le conseguenze di amore” (2004) and “L’amico di famiglia” (2006), each one focused on downtrodden characters: a loan-shark and a burned-out businessmen.

Sorrentino is fascinated by Italy’s defects and ambiguities. In 2007, he took a major artistic and political risk by writing and directing a fictional biography of former Prime Minister Giulio Andreotti, considered the leading figure of the Christian Democratic Party which ruled Italy uninterrupted from the end of World War II though the early 1980s. Andreotti was played by Neapolitan actor Toni Servillo, a favorite of Sorrentino.

A study of power, “Il Divo” won the 2008 Jury Prize at the Cannes International Film Festival and put Sorrentino at the center of a nationwide debate, since the powerful Andreotti was considered among Italy’s elderly untouchables. “The film proceeds like a black comedy version of ‘The Godfather,’ crossed with Oliver Stone’s ‘Nixon,'” wrote Pulitzer-prize winning critic Roger Ebert. “Almost every shot in the film is a grand composition,” added The New York Times.

Sorrentino grew up in Naples, living in an apartment with his parents and older brother and sister. He turned to film after losing interest in studying economics. A smoker, he lights up three times during the interview. “When I’m in the U.S., I go outside to smoke,” he says. “Once, in Los Angeles, a man said that I wasn’t far enough away from a restaurant. So I moved. I don’t make trouble. Especially in America, where I don’t know the laws.”

Sorrentino’s newest film, “This Must be the Place,” stars Sean Penn as Cheyenne, a faded rock star who decides to hunt down the aging Nazi who killed his father. The Guardian critic Peter Bradshaw praised the film’s “superbly elegant and distinctive forms,” also applauding a cameo by David Byrne. Shot in New York, Dublin and New Mexico, it is tentatively scheduled for international release in October 2011.

Sorrentino lives in Rome with his journalist wife and young son.

I’m not really famous. Or at least I haven’t noticed. Nothing has changed.

Is it better that way?

Yes. You become a director to stay behind the screen, not to be on stage. But small things are nice, like when people stop me on the street. I like it.

You use many theater actors in your films. Do you go to the theater often?

No, but I like theater actors. They are usually nice, intelligent, not capricious, so I like working with them a lot. They have lots to share about real life.

Sound plays a big role in your work… silence, rain, keys in locks, footsteps… Why this kind of emphasis in a country where people love talking?

From my perspective, a good film should neglect nothing … Every element needs attention, including sound. For example, “L’Uomo in più” was set in the 1980s, so I had to look for sounds connected to that time period… there were certain kinds of cars, Vespas and not scooters. Sound can also be very inventive.

No. There’s no audience for this anymore.

In “Il Divo” you suggest Mafia ties with the Vatican. Are Catholics wrong to revere the Church?

I don’t know. I’m not a believer. The power of the Vatican among those who don’t practice can seem invasive and bothersome. [The Church] tends to impose its views. It’s also acts as a breaking mechanism, a roadblock to aspects of social change. No one wants to make the Vatican unhappy.

For example, a while ago Italy wanted to allow same-sex couples and common-law couples, but this was stopped by the Church. But in terms of image, the Church still has the most developed one Italy possesses … the architecture, the vestments… all beautiful images. The Catholic Church was the first great producer of images, long before cinema. The number of important religious paintings isn’t an accident.

You seem to like monologues in your films. Why?

I don’t know. I like resolution via a long speech. I like it when actors give a lot.

You studied economics. Tell me about your transition to film.

My first experience was with friends from school and neighbors in Naples when I was about 20. We shot a 50-minute short film, a comic-grotesque story about a cooking competition. I was the director, but we were missing some actors, so I also played two of the characters. I showed the film to my friend Nicola who liked it, and he became my producer. We started working together.

Soccer plays a central role In “L’Uomo in Più.” What is the game’s cultural importance?

I didn’t really ask myself that. I like soccer. But I mostly wanted to talk about what happens behind the scenes, since it’s a world where a lot of people want to work. It attracts some disreputable characters: con men, liars, opportunists, dealers. Most fascinating worlds have a second, very sad side. They lure people trying to make money off the talent of others. Parasites move in these worlds. I like telling their stories.

In a recent interview, you said you really liked your movie “Le conseguenze di amore.” What makes you decide you like one movie over another?

My films are linked to different periods of my life. Making a movie takes about 18 months, so I like the movies that are connected with nicer times. I can’t really judge whether my movies are good or bad — I made them. During “Le conseguenze di amore,” for example, my son Carlo, who is now six years old, had just been born, so it was a happy time.

What family experiences had an effect on your work?

I honestly think that most things one does as an adult are based on experiences before age 14.

Your films have strong but crisis-hit male characters. Have you thought about using a woman lead?

Yes. Sooner or later I will. As a man, I presume to understand men better than women, so it is more difficult to tell a woman’s story.

What do you think about the way woman are portrayed in Italian pop culture, the showgirls on TV, and so on?

I’m mortified. Men bear the brunt of the responsibility. Italy is sexist and misogynist. It’s behind the times. It makes you feel sorry for the showgirls, which isn’t a nice feeling. Pity is never a good feeling. But compared to what you can feel toward men, pity is the better option. Italian men are cowards when it comes to their rapport with women.

Give me the names of your “desert island” movies.

Fellini’s “8 1/2,” “Roma,” and “L’Uomo che amavo le donne” — given that I’m stuck on a desert island I should at least have one film about a man who has a lot of women. Also the Coen brothers’ “Fargo” and [Martin] Scorsese’s “The King of Comedy.”

What most strikes you about the United States?

Lots of things. It’s not an easy place for a European who’s used to seeing people in the streets and having a city center. But since there’s not much shared living, you get the sense that there are a lot of secrets out there. People lead their lives internally. You can understand why the noir genre came out of the United States. People’s lives are very mysterious, closed.

Now that Barack Obama is president, has the September 11th chapter been closed??

I can’t answer. I did notice the depth of the economic crisis: closed restaurants, abandoned houses. It’s visible.

What do you think of the success of Italy’s Northern League (Lega Nord)?

I think the worst imaginable thoughts. The success of the Lega is among the things that irritates me most. [Lega chief] Umberto Bossi bothers me far more than Berlusconi. Not that Berlusconi doesn’t annoy me. But I find the Lega Nord intolerable. I’m blinded by loathing for it, so I’m not capable of rational thinking.

Racism is detestable, just as stupidity and ignorance are detestable. Racism has a lot to do with human stupidity, which is one of the worst things on earth, and also one of the most dangerous.

At 39, do you feel you have a lot in common with people your age?

Yes. When I was younger, I had more in common with my elders and I preferred being with them. Now that I’m a little older, I also enjoy being with people my age. I was never really young. I was always a little old inside. I always liked talking to people. Being young and crazy never suited me.

What are your thoughts about Roberto Saviano and “Gomorra”?

It was a good book and a beautiful film. I’m Neapolitan, so it may have upset me less than others; it was less of a revelation. Saviano got into details, but I already knew the reality of Naples.

Both you and Saviano dealt with the power… After “Gomorra,” Saviano had to get bodyguards. Did “Il Divo” cause problems?

No. I talked about a power structure that existed in the past, and which has changed a lot. Saviano talked about criminals while I talked about politicians. I received no threats. The worst I got was silence. Murmurs. You know, where you go in expecting that someone will talk about the film, but they avoid even mentioning it. Or they’re embarrassed by it.

No idea. Either a lot better or a lot worse. Naples escapes anything average.

You are about to shoot a film in English. Why? Does it require any special preparation?

I had an idea about this movie set in America. I’m preparing the way I do for other films. Cinema is pretty much a universal language.

Since you don’t have American cultural references, do you think that voluntarily or otherwise some of Italy and Naples might creep in?

I don’t think so. The film is about an American character who has lived outside the U.S. for the last 30 years. It’s as if he’s seeing America with new eyes. This helps me be closer to the character. Otherwise, a European telling the story of an American would be tough.

I have to pick? I like all three. Free time and film are the same thing for me.