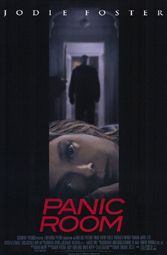 When a divorced woman (Jody Foster) and her daughter (Kristen Stewart) move into a New York City brownstone, they’re shown a little something installed by the previous owner: a panic room. It’s essentially a self-contained bunker room within the house. In the hands of director David Fincher (“The Game,” “Fight Club,” “Se7ven”), the introduction seems like a harbinger for claustrophobia and madness, or perhaps a sinister “Rosemary’s Baby” offshoot. Nothing doing.

Instead, four burglars come looking for hidden cash. When mother and daughter retreat to their chamber, a lurid standoff begins. The burglars begin quarreling among themselves, the daughter needs insulin, the ex-husband arrives to help and find himself in the crosshairs. With Fincher directing Foster, Forest Whitaker, and Jaret Leto, you’d think something crackling might emerge from all the static. But aside from Whitaker’s snarling, physical performance as Burnham, it falls sadly flat. Fincher’s tries adjusting to the inner pressure by stirring in the usual antidote to narrative flameout: violence, lots of it. It begets only chaos.