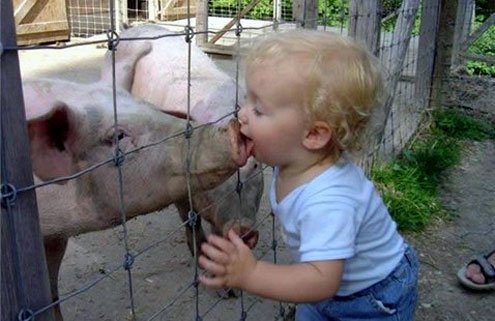 hen it comes to swine flu, it is hard to know which is more scary — the misinformed hysteria of most of Italy, where some people think you can catch it by eating a pork chop, or the schizophrenic seesawing between panic and nonchalance that you find in England.

On a visit back home last week, I hadn’t been in the country for more than five minutes before a message on the pay slip from the cash dispenser in the airport offered the helpful tip: “Catch it. Bin it. Kill it.”

It also urged me to ring a free phone number if I thought I had swine flu or consult the government website if I wanted further information. I might well have taken them up on their advice if it hadn’t been for a front-page story running in several of the UK dailies on sale at the newsstand just a few feet away. It revealed that the health experts manning the national swine flu hotline were actually 16-year-olds who were earning some pocket money during their school holidays.

Given that the government is now doling out Tamiflu to anyone who claims to have two out of a list of 10 or so symptoms, I suppose there is certain logic to this. After all, it’s a bit like a multiple-choice question that 16-year-olds would get at school. But finding the prospect less than reassuring, I nipped into a nearby store and did what most people seem to be doing in England at the moment. I bought some anti-bacterial spray, with “swine flu protection” impressively stamped on it, and applied it liberally to the hands of my three children. A complete waste of time and money, no doubt, but it made me feel slightly better, which is presumably the same reason that Japanese tourists all seem to wear face masks these days on airplanes and in the airports.

In actual fact, our trip over to England almost didn’t happen. As swine fever mania took hold in the Italian media, my husband, who was not coming with us, made it clear he was uneasy about letting us go to the UK, by now widely branded as the hotbed of pig flu-dom. Things weren’t helped by the return of a group of children from my 12-year-old daughter’s class. They had been to a town in northern England for a two-week language course and two of them had felt ill while there, with temperatures and headaches. The local doctor had brushed them off with paracetomol, but within hours of their arrival back in Italy the authorities in Spoleto had contacted all the childrens’ own doctors and forced the girls to have swabs to check for swine flu.

My daughter’s best friend was among the group and my daughter had slept the night at her house as soon as her friend got back. “Where did you sleep?” I asked her nervously, as the hysteria mounted next day. “In the same bed with her,” came the worrying reply. “Oh my god,” I said, snatching a bottle of water out of my younger daughter’s hand that her older sister had just been drinking from.

A phone call to our own doctor did nothing to allay my fears. I was told to put my daughter in quarantine for a week and keep her away from the rest of the family. As word spread like wildfire, I wondered if someone would come and paint a cross on our door.

In the event, our incarceration lasted less than 24 hours as we all got fed up staying at home. Predictably, the swabs later turned out to be negative, but no sooner was that panic over than another one emerged. Late at night there was a knock on the door from the wife of an English family renting an apartment at our house in the Umbrian hills. Her husband wasn’t well, she said, and needed to see a doctor. I asked about the symptoms and involuntarily took a step back as she told me: high temperature and headache. She herself looked taken aback as I told her the family holiday might be over. “You could all be placed in quarantine,” I said reassuringly. “Give your husband some of this and tell him it’s best if he can avoid seeing a doctor,” I added, pushing her out of the door with a half-empty bottle of children’s paracetomol syrup.

Next day, the husband was worse, and reluctantly, I drove him to see a doctor in the next village, who swiftly pronounced that the poor man had bronchial pneumonia. I smiled with relief, beginning to feel both foolish and a little guilty. “It’s just as well you brought him; he’s really very ill,” said the doctor, writing out a prescription for some antibiotics. “You should really take him to hospital to get him a chest x-ray. But everyone is so hysterical at the moment, they probably wouldn’t let him out, so it’s probably best not to bother.”