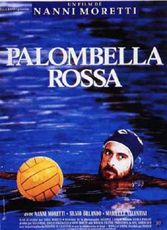 Nanni Moretti is above all a political satirist. But he’s also a master allegorist. The two meet up genially in this semi-autobiographical story of an amnesiac water polo player (Michele Apicella, a Communist MP) who uses the thrall of a game to re-establish the why of his political beliefs. What keeps Moretti from the dogmatic is whimsy: sure, the Italian Communist Party has lost its way (hence amnesia), but Michele has bigger fish to fry, including finding out who he really is, how he got that way, who instilled his beliefs. Chats with spectators introduce reminiscence, the in-progress game (against Hungarians) kicks up adrenalin, and childhood flashbacks install values.

NB: A palombella, in water polo, is a soft lob that catches a goalie napping; that would make the title “shrewd red” or “red embarrassment.” You choose.