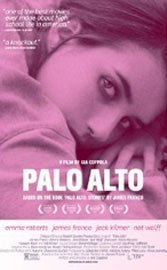 Artistic Teddy (Jack Kilmer) is a confused California high school teen who’s crazy about April (Emma Roberts) but doesn’t know how to say so. April is an articulate classmate who likes Teddy but doesn’t know not to be shy. Result: insecure Teddy falls under the influence of self-destructive wild-child Fred (“I’d fuck this tree…”) while pretty but apprehensive April, pitied by her more wanton classmates as a virgin (“…so adorable”), fumbles her way through the cattiness around her, and lets smitten soccer coach Mr. B (James Franco) talk her into bed.

Gia Coppola’s debut feature, based on Franco’s 2010 short story collection “Palo Alto,” is less concerned with innocence lost or adolescent coming of age than portraying the near-total collapse of the buffer zone that once shielded the fumbling mid-teen world from more explicit carnal explorations, or tried. For the California branch of the American teen world such a buffer is antique. Aggressive sexuality is the language of approval. Parental guidance is nil. Casual is as casual does.

Impressionable Teddy, sensitive April and delinquent Fred are the keepers and inhabitants of a prematurely intimate world whose members, particularly its girls, are intent on casually mimicking adult eroticism, pushing the more sensitive and eager-to-please among them through the kiss-and-blow job motions just to feel a little more confident. Coppola bitter-sweetly sets aside old school notions of first kisses and physical awkwardness and replaces them with literal loose lips and alcohol-accelerated promiscuity.

She assembles a credible a group of hormonally overdosing boys and girls all trying to configure the complications of things they don’t yet understand, including the difference between love and being approved of, as in “please be nice to me.”

Coppola poignantly sketches out April’s self-conscious liaison with Mr. B, and does the same with the still-waters-run-deep percolations of class slut Emily (Zoe Levin). But the whole, like the kids it tells of, hammers at one (melancholy) chord: That teen life is no Christmas carol. Aside from Coppola’s film family pedigree, Jack Kilmer is Val Kilmer’s son and Emma Roberts the niece of Julie Roberts.