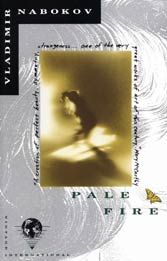 Nabokov’s 1962 novel is the tart (if too clever) standard-bearer for literary/academic grand guignol. It pees on fraud, Freud, the Ivory Tower, and all that is mundane and habitual. The conceit takes place in “New Wye, Appalachia, USA” and centers on Wordsmith College lecturer Dr. Charles Kinbote, a bizarre émigré from the ridiculous kingdom of Zembla (“a distant northern land” whose revolutionaries are as idiotic as its monarchists).

Kinbote’s adoration of curmudgeon poet Joseph Shade is unbounded. But the frail Shade dies, leaving Kinbote to annotate his triumphal epic poem, “Pale Fire,” which he does by cramming all things Zemblan into the poem’s “Commentary” (we learn that the king of Zembla is gay Charles Xavier the Beloved and that “crapula” is Zemblan for hangover).

Nabokov sums up his farce as “an old-fashioned melodrama with three principles: a lunatic who intends to kill an imaginary king, another lunatic who imagines himself to be that king, and a distinguished poet who falls into the line of fire…”

This is an artful hijacking-within-a-hijacking that only Nabokov could pull off without sending the airliner into a tailspin.