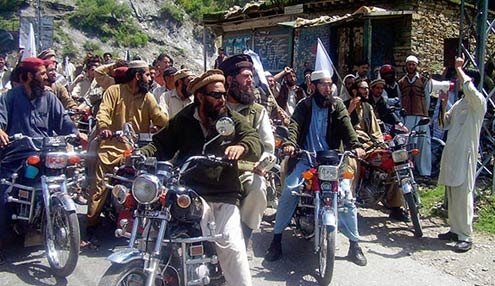 ou could call them bullies, Syria, Egypt and Algeria, bad-boy Arab states with long rap sheets and a no-nonsense approach to survival.

Syria’s Assad dynasty is an Armani cabal. It slays its own but ships their semen elsewhere, to the West Bank, Beirut, Gaza, you name it. Anywhere but home. In 1982 the heavily-armed Muslim Brotherhood “liberated” Hama north of Damascus — “Rise up against the infidels!” — and murdered some 50 local officials. A month, poison gas and 25,000 dead later, the army retook the city.

That, said Syrian President Bashar al-Assad, son of Hafez who ordered it and nephew of Rifit who carried it out, was the real counterterrorism. The sulking Muslim Brothers turned to easier pickings, the World Trade Center. That was 1993. Twitter away, kids.

Egypt hosts another suit in Hosni Mubarak. The jowly Mubarak flanked Anwar Sadat in November 1981 when Islamic extremists bloomed from a military parade and thwacked the dumbfounded Cairo crowd.

The severed limbs made CNN’s day but not Hosni’s. Army, secret police and judiciary were reorganized to ensure Egypt stayed secular, which is what Nasser and Sadat intended.

Nasser, you may recall, was Egypt’s Atatürk. Atatürk in turn was the man who didn’t think Armenians had any business in Turkey. A few years later the world’s Armenian population was down a notch. (But mum’s the word; don’t mess with Turkey.)

Algeria’s hard core came via France, which bloodies as well as it cooks. When the Islamic Salvation Front won elections in 1991, the French-trained army concluded that killing the victors was better than losing. Pre-emptive deterrence produced a decade-long festival of massacres that neither seemed inclined to end until an amnesty was finally fashioned.

Which brings up Pakistan, not an Arab country but a Muslim one.

Unlike Syria and Egypt, it doesn’t have a hit man. Unlike Algeria, the Muslim party hasn’t won. Pakistan’s peril is still ensconced behind its civil, British-trained veneer, which may be nearing a meltdown.

Pakistan’s organizational model, like India’s, came from England’s fierce mix of restraint and ruthlessness. Though both India’s majority Hindus and Pakistan’s preeminent Muslims are restless by nature, Pakistan is more steeped military tradition and weapons. It has an incendiary gene no Gandhi ever quelled.

Sharia law? Why not? Zia self-servingly courted the Muslim world. He backed the Afghan Mujahideen against the Soviets while placating Muslim leaders at home. He shored up the army and secret services and imposed martial law. The same U.S. strategists who bet on Saddam Hussein gambled on Zia. Smart at the time.

But the generals and politicians that followed couldn’t save Pakistan from its own toxicity. Corruption, anti-Soviet insurgency, pro- and anti-Americanism, Afghan opium wars, terrorist cells, acres of cash — zig hammered at zag. The center shrieked loose.

Though ostensibly run by billionaire Asif Ali Zardari, the late Benazir Bhutto’s husband, Pakistan now operates in the image of Cairo and Damascus. Yet army and intelligence factions are increasingly hard-pressed to turn youth away from the rural radicalism that has streamed from the Mujahideen hive (including the Taliban and al-Qaeda).

Shrewd brutes in the vein of Zia have lost their traction. The latest strong man, Pervaz Musharaff, made the army seem puny by embracing the U.S. after 9/11, particularly as “infidel” troops punished Afghanistan and Iraq. Bhutto, the last of Pakistan’s populist democrats, was assassinated in December 2007.

The country’s security apparatus is stuck in no-man’s land. Many Pakistani soldiers are poor and in their impressionable late teens and twenties. Islamic propaganda, like that of Western European Communist Parties of the 1970s, emphasizes official venality and the gap between rich and poor. The military’s own upper echelons are divided over how to respond to radical, state-building Islamism. Even an Islamic state needs a military, after all. Look at Iran.

What Hilary Clinton recently labeled Pakistan’s “existential threat” is really a nation adrift. Stuck in a cycle of scandals, social inequality and corruption, Pakistan’s civilian leadership lacks the focus and clout to oppose resolute challenges. The country’s traditionalist outback, particularly regions closest to Afghanistan, is vulnerable and available for the taking, which the gangland Taliban continues to prove.

What would most suit preoccupied Washington is another big-stick general, a swarthy opportunist. Someone like the nationalist Saddam of the early days, say. Or an Armani Assad with counterterrorism in his meaty paw. History is famous for laughing last.

The enemy of your enemy is your friend.