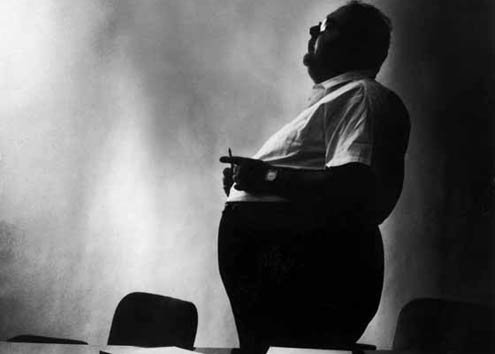 y Cold War life was a three-part harmony. First came fallout shelter drills at school. The bell rang three times and we’d be escorted to the dank basement — NO TALKING! — and huddled like gerbils. The second was making plastic models, in my case of H Bomb-carrying bombers or missile cruisers ready to incinerate the world (if only I’d learned to use glue; I hadn’t and most of the missiles melted). The third were my parents’ dinner parties that were visited at times by the Overkill Man, a very rotund friend of my father’s who spoke a menacing language I never heard before or since.

In general, my dinner party role was scripted. I’d appear at 7:30 p.m. in my elephant pajamas with the family’s Kodak Instamatic 104 camera. I would mill around and take photographs, occasionally “instructing” guests to get closer (an early test of order-giving). The guests had their own scripted response, mostly cooing (the women) and praise and grunts (the men). I would then be told my time was up and ushered upstairs, leaving the guests to chat and dine, smoke and argue, a curious adult ritual.

But much changed in the presence of the Overkill Man, who for whatever reason (a joint conspiracy between my father and him) insisted that I be allowed to stay on a little longer and observe the adults. When he came, I huddled behind the beige sofa chair, my camera still in hand, and listened to the men and women speculate about what I soon understood was the end of the world. Not the end of the world as I’d built it up in the basement, with my mangled model jets and sagging missile cruisers, and not the abstraction of school drills (NO TALKING!). No, this was something else entirely.

I was eight, soon to turn nine, and the portly Overkill Man, who worked for a company called RAND (strange name, I thought), went on and on about what a “first strike” and response would mean to the country in which I lived and chased squirrels in. A nuclear exchange, he said, wouldn’t be that bad, if very bad was the baseline (I imagined only a ruler). If “we” struck first, which he suggested might be a good idea (them being the Russians), we could expect many major cities destroyed, 50 million dead (with more to follow from radiation sickness). When they responded, which they would, we could expect the annihilation of several major cities (including Washington, where I lived, which I wished he’d leave out of things), and about 20 million dead (I would not be among them, I told myself, since I was immune to dying).

My father and the Overkill Man went back and forth on theories of what they called Mutually Assured Destruction, with my father insisting the numbers were absurd because they meant the extinction of human-kind as we knew it. But the Overkill Man insisted that wasn’t so: 100 million dead didn’t mean the end of anything, just the start of a rebuilding process that might eventually yield a saner world, because people would know never again to do what they’d done.

The Overkill Man laughed a lot, a kindly confident laugh, which seemed strange since he was talking about hundreds of millions of dead people. The assembled women, wives mostly, smoked cigarettes and shook their heads. One said the Overkill Man was lunatic, to which he replied the word was really meant for those who bayed at moon, and were therefore seen as mad, which he wasn’t. Nuclear war, he insisted, was a coming reality, “and just around the corner.” Another woman sobbed and insisted a child shouldn’t be around to listen to him talk.

Nonsense, said the Overkill Man, “a boy needs to know what’s what.” I liked being around living adults — an odd species — though I admittedly struggled to compute the war scenario in my head. If nearly everyone soon would be vaporized who would be left in the playground, and what about my friend Rebecca (I loved her, I was sure)? I consoled myself that we’d survive and retain out squirrel-chasing gift.

But nothing upset the Overkill Man. “We have to resign ourselves to a scenario where tens of millions die but tens of millions also live one. Those who survive fallout will become normal, like the plague. The human survival instinct will make those who don’t die eager to start again. Like our young Christopher here…”

Glad to have been anointed a survivor, I grinned at the Overkill Man, whose name was Herman Kahn, but my mother finally decided enough was enough. Survivors apparently needed their prewar sleep. By the bed, she said, “Forget what the very big man said.”

But I didn’t. And many nuclear pacts later, I haven’t.