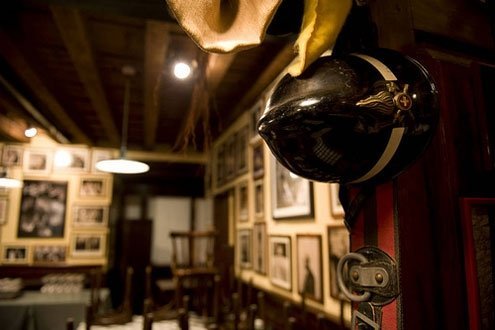 Al Pompiere: The fire comes from the penne.
R

ome’s Jewish ghetto is among the world’s oldest. The word ghetto derives from the Venetian word gèto, which means metal castings (the Venetian ghetto, 40 years older than the Roman one, was built near a foundry, hence the name.) In 1555, Pope Paul IV revoked the rights of Rome’s Jews, forcing them to live in the city’s Sant’Angelo district near Teatro Marcello. He also imposed a dawn-to-dusk curfew and made Jews wear yellow colors for identification.

Time and again, the city’s Jews were duped into believing they’d get the same privileges as Christians only to have the Catholic Church object. The ghetto was closed in 1870, when Rome was annexed into the Kingdom of Italy. Jews were made full-fledged Italian citizens. Problems would again arise under fascism.

Italian unification generated the neighborhood’s remodeling. In 1888, the ghetto’s sinuous streets were demolished in favor of three wider thoroughfares: Via del Portico d’Ottavia (which replaced Via della Pescheria, site of the old fish market), Via Catalan, and Via del Tempio. The network of blocks and alleyways that had once characterized the area were replaced by wide-open spaces and four building complexes. Order replaced quaintness. For a flavor of the ghetto before the overhaul, have a look at the buildings along Via del Portico d’Ottavia, which date to the flurry of construction in the Augustan age.

In 1904, the city opened its art deco-style Tempio Maggiore synagogue (Great Synagogue), among the largest in Europe and built on the site of the neighborhood’s original synagogue, a site that once contained five so-called scole, Italian for synagogue.

When today’s Romans talk about the ghetto they imagine an area that extends from Lungotevere dei Cenci along the Tiber to Via del Portico d’Ottavia, and also covers Via della Tribuna di Campitelli, Via dei Funari, Via dei Falegnami, and Via Arenula.

When I first met my wife, she shared an apartment with two women on Via Arenula. Walking together, we’d often get lost in the maze of nearby alleyways. The local forno, or bakery, was among our favorite stops. We’d snack on crunchy pizza bianca, white pizza. In my pajamas and slippers I’d sometimes venture out to bring home a white pizza slice which I then slathered with Nutella and dipped into a hot cappuccino. Among my favorite snack and bakery spots was and remains Antico Forno del Ghetto (Piazza Costaguti, 31; closed Saturday and Sunday afternoon). It opened in 1927 and offers all kinds of kosher products as well as bread and pizza.

Another must is “Boccione” Limentani (Via Portico d’Ottavia 1, closed Friday afternoon and Saturday), the only kosher bakery in Rome and among the city’s best. An institution for the city’s Jewish population, Boccione represents my own memory lane. As kid, my mother and my grandparents would take me there for treats. Years later, when I returned with my wife, I felt like I’d walked into a wormhole. Nothing had changed.

Boccione’s bakery goods are simple, delicious and follow traditional recipes, oblivious to trends and true to a baking tradition that dates to medieval times. Most have been handed down orally over generations. Some days you’ll run up against long lines, including priests and nuns. Legend has it that even the pope shows up, which makes me wonder if he also waits in line or if they keep him on hold a bit longer as payback for centuries of discrimination.

Specialties abound. Take the ubiquitous ginetti, lemon-flavored biscuits. As a boy I’d make them into airplanes that dove into my milk. Then came pizza di beriddle and mostaccioli ebriaici, sweet cakes with candied fruit, almonds, pine nuts and raisins. The washer-shaped biscottini are made from almonds, cocoa, and cinnamon. Morning dishes up cornetti giganti (giant croissants) and veneziane (brioche with cream). Treccia, with sugar and cherries, are made on Friday.

Holidays expand the rich array. Purim (Jewish carnival) brings tortolicchio, hard dough made with honey, almonds and candied anis. Pesach (Passover), which bars leavened foods, ushers in donuts made from eggs, sugar, flour and oil, macaroons with almond paste, and the renowned honey pizzarelle. Don’t miss a taste of unleavened meatballs mixed with chopped chocolate, pine nuts, and raisins, dipped in hot boiling oil. Pies, another delight, come in all shapes and sizes. Some are stuffed with ricotta cottage cheese, others made with sour cherry jam and chocolate.

Another appetizing (if more expensive) spot is Ristorante Piperno (Via Monte dei Cenci, 9. Open Tuesday-Sunday for lunch only; closed on Sunday night and Monday. Tel: 06.6880.6629). Big and bustling Piperno serves honest Roman food with a lovely location as an added bonus. Come ahead to visit the small church of San Tomasso next door.

Al Pompiere (Via Santa Maria Calderari, 38. Tel: 06.686.8377) has plenty of color. Rome Jewish cuisine naturally leads the menu. I especially like the house special, Pecorara, a stir-fried mix of brain, cottage cheese, breaded lamb chops and artichokes. As for the name (“at the fireman’s house”), the father of the current owner was nicknamed “the fireman” for the amount of pepper he lavished on his penne all’arrabbiata. Diners extinguished “the fire” with … wine. Lots of it. The restaurant is located on first floor of the Beatrice Cenci palazzo, with its 16th-century ceiling frescoes. You can drop in just for the frescoes.

In the spirit of ghetto sweets, here’s my recipe for sour cherry pie, which is similar to one that’s used at Boccioni. Since the ingredients and concoction of Boccioni’s famous pie is a carefully guarded secret, my family copied it based on their own taste buds and methods. My grandmother prepared this version at her father-in-law’s restaurant, “Il Cavallaro.”

— Combine all the crust ingredients to create a uniform mixture and then put the dough aside to cool for 30 minutes. After 30 minutes, take a little more than half the dough and kneed it.

— Coat a high-topped baking pan with the dough. Drop in the mixed ricotta and sugar and ensure it covers the whole of the pan, including the corners.

— Thin the sour cherry jam with a little water and, after mixing, spread it over the layer of ricotta.

— With the remaining dough, make a disc with the same diameter as the pie itself, to use as a cover. Before baking the pie, beat one yolk and brush it on the surface of the pie. Bake in a preheated oven at 180C for 50 minutes.

Enjoy the pie with a vino passito (sweet wine) or a Moscato dolce.