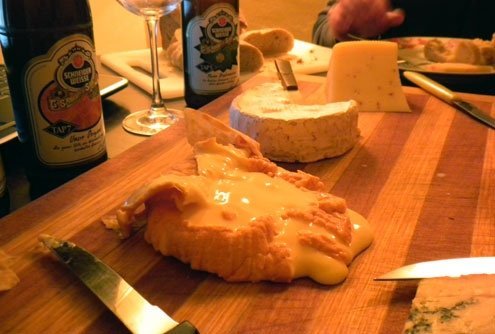 Mixing and matching is the key to taste.
I

recently attended a wine tasting where a sommelier explained how the taste of a wine could change with the right food pairing. I’d never heard it in such detail. I’ve always tried to match appropriate wines with meals (white or lighter reds with seafood, full-bodied reds with meat-heavy meals), but his precision carried it a step further.

Our exchange took place over a glass of Sagrantino di Montefalco. Take a sip, he advised, and notice how the tannins were overpowering. Then, before the next sip, nibble on a piece of salumi or prosciutto.

He explained that the fat of the meat lingers in your mouth, literally getting caught in the bumps on your tongue. The strong flavor of the wine then melds harmoniously with the fat, creating a perfect finish for the meat.

He was right. It was a match made in heaven, or Umbria, my version of heaven, with its full-bodied red wines and equally wild culinary tendencies.

A few days later I mentioned the story to my roommate who was skeptical that food could fundamentally change the perception of a drink. Since he doesn’t drink wine, we decided to organize an informal beer and cheese tasting. We got five people together, threw in €15 each, and went shopping.

Our first stop was Rome’s Comptoir de France, a rare pillar of French gastronomic delights located just behind Castel Sant’Angelo. There, we picked up a stinky Camembert and runny bourguignon au Chablis.

After that we needed an Italian selection. It was already early evening so we hit the reliable cheese counter of a newly-opened Despar supermarket. We settled on a Gorgonzola piccante (spicy gorgonzola) and a fresh ricotta di pecora (sheep’s milk ricotta).

Such an impressive cheese lineup demanded a worthy beer “opponent.” Fortunately, there’s shrine to beer just a few blocks from our apartment — the Gradi Plato. We walked in and explained our plan to the excited owner. We wanted four kinds of beer, a lighter wheat beer, a hoppy IPA, middleweight amber and serious stout or Trappist ale to finish things off. His detailed breakdown of all his bottles reassured us about his judgment.

He sold us on two wheat beers from the same German brewery, Schneider Weisse’s Meine Hopfenweisse and Unser Original. We also picked up two pale ales, a British St. Peter’s IPA and an Anchor Liberty Ale from San Francisco, an Italian amber, San Paolo’s Hemlock, with a stately Belgian Chimay Grande Reserve as the finale. With cheeses from two countries and beers from five, we were ready to go.

As we cut into the bourguignon it oozed out of its thin, pale reddish-orange rind. This gooey glop of goodness had a strong and lively flavor that overwhelmed the lighter wheat beers. As we moved up to the pale ales things got more interesting.

The strong flavor the cheese left on the tongue was followed perfectly by the slightly bitter aftertaste of the St. Peter’s IPA. The beer by itself was not overly bitter, but combined with the cheese the beer’s true bitterness shined through.

It went even better with the Italian San Paolo’s Hemlock Ale. The underlying sweetness of the cheese lingered as the beer cleared away its harsher beginning. In this case the beer enhanced the flavor of the cheese, bringing out a subtlety that was not noticed otherwise. It was a case of a frog and an I-tie getting along for once.

The Camembert, which tasted better if you ignored the stink, didn’t line up perfectly with any of our beer selections. The Anchor Liberty Ale was just bitter enough to cut through the intense flavor of the Camembert and leave your palate feeling cleansed and ready for the next bite, but neither was improved by the combination.

The two Italian cheeses came from far opposite ends of the spectrum. The Gorgonzola, spicy rather than sweet, had a lot of kick and almost matched the French cheeses in its odor.

When paired with the St. Peter’s IPA, it brought out the sweetness in the beer, as opposed to the bitter side the bourguignon enhanced. It also matched up very well with the Chimay. I was surprised because I thought the intense flavors would be too much for each other. But the Chimay, while robust, was smooth enough to complement the moldy blue cheese and not fight it.

The surprise of the evening was the ricotta. It was okay with the first five beers, when paired with the Chimay it turned into something different. The Chimay, with an intense, flavor of dark fruits and grainy breads, mixed with the creaminess of the ricotta almost tasted like you were eating a slice of toasted, hearty whole-grain bread lathered with cheese. An impressive effect considering I thought the nine percent abv (alcohol by volume) of the Chimay would wipe all remnants of the delicate cheese away. Thankfully, I was wrong.