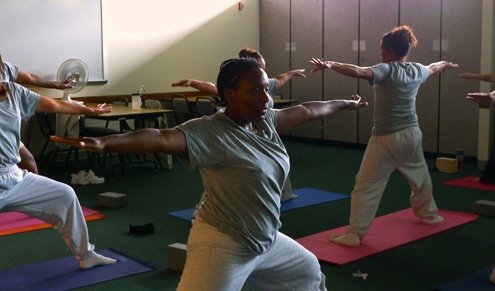 houlders broad, chin held high and eyes focused forward, she walked slowly to the front of my small classroom and placed her yoga mat neatly beside her. The other women who’d gathered in groups of two or three moved aside as if to give her wide berth. Though they all wore the same drab grey sweatpants and oversized white t-shirts, their faces told stories of pain, loss, torment and shame.

In all the months I’d been teaching women at the state correctional facility I’d never felt frightened or in danger, but this was different.

I studied my new student before approaching her. Her head was shaved, revealing a perfectly shaped skull. Her face was young, flawless, with rich mocha skin, full lips and deep brown eyes. Her beautiful flesh, beginning at her neck, had been carved. Words, drawings and symbols — made with knives instead of tattoo needles — decorated every hint of skin that showed outside her prison clothes.

I wanted to keep staring, keep studying the symbols that made up this young woman, but out of decency and privacy I looked away.

After agreeing to teach a weekly yoga class at the penitentiary, I specifically asked the staff to refrain from giving me details about the inmates. I didn’t want to know what any of them were “in for.” I considered it my duty, and their privilege, to not know. It was hard enough passing through metal detectors, having my bags searched and locked up, and being escorted to my little yoga room by an armed guard. If I added judgment to the preexisting pressures, I knew I’d have a hard time focusing on the teaching itself. I also knew that whatever the circumstances of their incarceration, there was probably an untold story to which I’d likely never be privy.

Sometimes details slipped out and I’d find myself angry. Take the woman I’ll call my “ideal student.” Smiling, she was always the earliest to class and the last to leave. She had the wholesome look of a teacher and ran the craft room, filling baskets with homemade quilts and pottery. She practiced yoga almost daily. If I ever needed a helper, she’d volunteer in a flash.

One day, after about two months of teaching, a staff member made a comment about her being a “lifer.” “What a shame,” I said, and began to pack my things.

“Yea, well, after shooting both your parents in the head and setting the house on fire I guess you kinda need to spend your life here.”

I took my things and left, saying nothing. In my car I took a deep breath and tried to clear my head of this “accidental” information. From that day on, I had to consciously bury what I knew, which I found extremely difficult.

I approached the bald student and introduced myself. She wasn’t nearly as scary up close, kindly and pleasantly shaking my hand and telling me how happy she was to finally be trying yoga, which she said she’d wanted to try for a long time.

During the practice she seemed to exude calmness and ease, as if something was familiar to her. For someone new to yoga, she seemed to flow effortlessly, while the other women struggled, moaned and flailed in the poses. I found myself drawn to her.

She reappeared the next week. Again, the intimidated women gave her wide berth. A guard looked on warily. This time I was undaunted. She smiled at me, prepared for practice, and class began.

When it came to learning Urdhva Dhanurasana, or backbends, the moaning in the room grew louder. I made my way around trying to help those struggling or in need. After assisting an older woman I happened to look up. My new student, the “painted lady” as I’d nicknamed her in my head, was completing the most beautiful backbend I’d seen in any class, ever. Standing in front of her mat I let out a big, “Wow” as she finished the pose. “That was amazing!” I told her.

“I studied ballet for a lot of years,” she replied in a near childlike voice.

After class I sat in my car for a very long time, taking it all in. Here was the painted lady, a young and beautiful woman, who had cut up her entire body to leave passages of her life for the world to see. She walked with conviction and rage. Yet this same woman had been trained in ballet as girl, and when given a chance her body moved with fluid grace and beauty.

But I would never see her again. When she didn’t show up over next few weeks I finally asked my “ideal student” what had happened. There had been a nasty fight, she told me, and the former ballet dancer was now in solitary confinement.