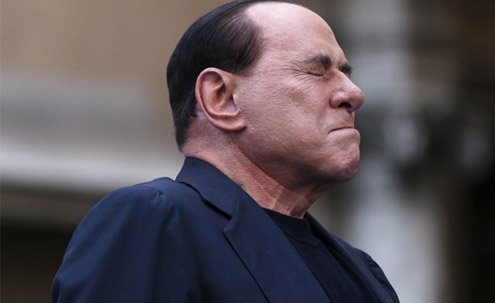 Berlusconi: Hanging on no matter what, and no matter the cost to Italy.
I

’ve frankly had enough of a certain 76-year-old former prime minister and his cronies clinging stubbornly to the reigns of power. It’s bad enough that he’s been formally convicted twice in the span of three months. Worse still is watching his insiders continue to defend him unflinchingly, insisting it’s unconstitutional to ban him from office after his four-year jail sentence for tax fraud was upheld.

I am seriously looking forward to the day when Berlusconi is no longer worth even writing about. But we’re not there yet. Not even close. For now, he continues making his presence known, scheming over how his party might take down the government of Prime Minister Gianni Letta, which needs his support to survive. As appealing as I find the idea of a Berlusconi on the fringes, that day remains far, far away.

I mention all this because I live in a country — England — where, though politics is far from perfect, politicians are usually booted out for the right reasons.

Plebgate is a good example. On Sept. 19, 2012, Tory MP and former chief Whip Andrew Mitchell had a strange showdown with police. Leaked logs showed that the bike-riding Mitchell apparently swore at officers at 10 Downing Street when they refused to let him leave through the main gate. Not only did he swear, he called them “plebs,” a derogatory term describing someone of a low social class.

As soon as the story hit mainstream media, media commentators and political colleagues immediately called for Mitchell’s resignation. He apologized repeatedly but eventually stepped down in late October.

Since then, however, some of the allegations against Mitchell have been contested, mostly based on how the police information got out in the first place. Authorities have opened an ethics investigation. But what’s interesting about this case is how in unfolded. Both media and politicians quickly saw the damage Mitchell had done to himself and his political career were beyond repair, and pressed him to step down, a smart choice, and the right one. A person in power has no right to offend those he represents. Period.

It’s a perfect illustration of something being perceived as wrong, something that was wrong, and a politician rightfully taking the blame. Italian politics is immune to such accountability. Had a “pleb”-like scandal erupted there (and far worse already has), little would have come of it. Yes, politicians might criticize an untoward comment by one of their fellows, but it usually goes no further. As for the politician responsible for the offense, he or she might apologize and call it a day.

Just look at Roberto Calderoli, the vice president of the Northern League who earlier in the summer called Integration Minister Cecile Kyenge an orangutan.

His apology? He said he’d gone too far and sent her a bunch of red roses. Not good enough, and frankly, embarrassing. But Calderoli, who admittedly represents a party with no love for immigrants, emerged largely unscathed.

Italy has lots of political problems, so many in fact that it’s easy to believe thing just can’t change. But they must. The old boy network can’t last, or shouldn’t. Italy has a population, a public, a citizenry, a constituency, and it deserves to recognize its interests and see them served. Politicians exist to assist people and country, not themselves.

In fairness, Italy is not all Berlusconi and Calderoli. The orangutan comment produced a wave of outrage, with many sincerely rushing to support Kyenge. But it’s not enough, particularly given today’s reality: namely the continued pre-eminence of a convicted politician who defiantly refuses to acknowledge he’s done anything wrong, sets himself up as a martyr, and gets ensures his cronies continue to spout his innocence. It’s a laughable situation. It’s also painfully real.