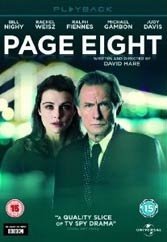 Once, the classy if gloomy Cold War conceits peddled by Len Deighton, John Le Carre, and Fredrick Forsythe were consistently transformed into classy, well-conceived thrillers hitched to intelligence and wit. But as the Cold War dried up, so did the stories. Spies were turned action heroes. Or made glum.

In one fell swoop, director David Hare (an acclaimed playwright inactive in movies for 20 years) revives spydom’s Happy Days with a crisp old-school tale of intrigue that runs the table thanks to the cool and ironic Bill Nighy, long among Britain’s most underrated British actors. Sixtyish Nighy is jazz and art-loving Johnny Worricker, a longtime MI5 agent with lots of ex-wives and a daughter who’s pregnant by an installation artist (“At least they’re good for something…”) Johnny is more than startled when old friend and MI5 boss Benedict Baron (Michael Gambon), a judicious man, openly admits he’s come upon a file suggesting the British prime minister knew about U.S. war on terror torture and its specific suspects but kept the intelligence from… intelligence.

When Benedict dies suddenly, Johnny’s up against stiff odds in following up on his boss’s wish that the story get an airing out. Complicating matters is his apparently accidental meeting with a Syrian-born British neighbor and activist of sorts (Rachel Weisz) whose brother was shot dead by Israeli troops. Does she have her own agenda?

Ridiculed as behind the times by his peers, Cold War Johnny has a trait the amoral moderns lack: He knows what he does and doesn’t believe in. Loyalty matters. This opens the door to a delightful cat-and-mouse game with higher ups (Ralph Fiennes is suitably malicious in a brief appearance as predatory PM Alec Beasley).

Hare’s political side makes the most of domestic fallout from Prime Minister Tony Blair’s often-criticized kowtowing to President George W. Bush. But he’s too adroit to let politics dictate the story. This is a toast to honor among spies and honor in general, which makes it a distinctly non-21st-century movie in praise of decent men.