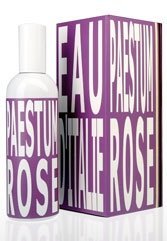 e were shuffling along the chipped sidewalk on our way to dinner when she said it: I don’t believe in love. I replied  I wasn’t sure I believed in monogamy, but I certainly believed in love, regardless of how long (or short) it lasted.

We entered the warm restaurant, and as we loosened our scarves, Lena leaned into me and offered her wrist, “Smell it now! It’s peppery, almost green pepper, and there’s something else spicy in there.”

“Ginger root?” I suggested. “It’s woody, ashy almost.” In one of those precious instances when friendship deepens one notch further, we had discovered a shared obsession with scents, and had spent the greater part of the afternoon and the first hours of the evening spritzing swatches of fabric and locks of hair with a perfume called Sienne l’Hiver, Winter in Siena, from “Eau d’Italie”.

We settled into a bottle of Sauvignon Blanc and laid out our Saturday plans. The next morning we would trek into town to hunt down more of this green, peppery perfume with smoky undertones and the slick of crushed black olives that intrigued us.

Later that night I would reunite with a man I’d dated in college who would most certainly find me striking and much improved with age. A decade had passed since he’d abandoned our three-month courtship with a flimsy excuse. In Chicago, circa 1998, our relationship fizzled relatively easily, leaving half-hearted question marks in its wake.

Lena planned on deep cleaning her apartment in preparation for her parents’ visit from abroad. She had nothing else in mind, which as it happens, is the ideal backdrop for romance.

The next morning, we entered the dark shop, and stuffed our pockets with samples. The makers of the beguiling, peppery perfume had produced five other scents, each intoxicating and unique, inspired by the seasons and the seaside, by sun-drenched terracotta, and by the ships of spice merchants in 16th-century Venice.

Back at home, I tried on dresses while Lena mopped room after room of her apartment. Together we read the descriptive labels on the precious little vials. My “date,” we decided, called for a fragrance at once pungent and lingering, something reminiscent of sweetness, but edged in mystery, something daring but with the promise of comfort. I selected Baume du Doge, a thrilling blend of orange peels and Indian spices that combined the innocence of an orange creamsicle with eerie old church incense, and as Lena pointed out (cynical to the end), confessions of the darkest nature.

Another perfume, Paestum Rose, was named for an ancient port city just south of Salerno, where roses still grow wild, and where Romans once cultivated aromatic herbs for the embalming of the dead, as well as for the anointing of the living. A hub of the perfume industry and a city of temple shrines, the breeze around Paestum smelled of flowers and burning oils imbued with exotic resins of benzoin and myrrh, to temper the whims of gods and empresses.

The perfume melds timelessness and immediacy, the classic elegance of rose tinged with uncertainty. How exactly does a rose smell? Dry, sweet and creamy, with edges of something sharper. Lemon rinds? Or the clover we used to gather as children — we called it sour grass and delighted as it wilted on our tongues and stung a little. Or even pink pepper, a contradiction of sweet and spiky.

Lena bathed her neck and wrists in Paestum Rose, and reveled in its shades of pink and black before blunting it completely with Windex.

The phone call came around 4 p.m., while I was curling my lashes. The floors had dried and Lena was replacing the dining room chairs. An old friend of hers was in town for the night, and would she like to meet him for drinks? She dressed in a why-not wool skirt and white blouse, applied the minimal traces of lip-gloss and mascara for such a meeting, and a final dab of Paestum Rose. She slipped the remainder of the tiny flacon in her pocket.

That night snowflakes fell on the city and turned everything quiet and clean. I hugged my former flame goodbye and didn’t look back. As he watched my footprints multiply and disappear, he could smell traces of cardamom and cloves on his fingertips.

Across town and hours later, crowds dispersed into the whitened night, leaving two faces to study the novelty of each others lines, and fill in the missing years with words and glances. Lena and her friend left their old stories at the empty bar and went home to make new ones.

The next morning Lena met me at a café. She was flushed with sleeplessness. Her blue eyes twinkled behind tortoiseshell frames. The scent of crushed pink roses floated atop the thick steam of her coffee.

She drew the cuffs of her blouse to her nose and breathed in deeply. “I think I’m in love!”