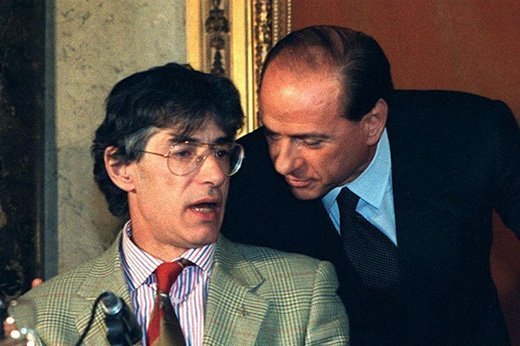 The last pseudo-populist Italian tandem may sound familiar: the Northern League's Umberto Bossi and Forza Italia's Silvio Berlusconi in 1994. Bossi was convicted for embezzlement while Berlusconi has had more than his share of problems.
F

lip the roles of Mike Pence and Donald Trump and — with a bit of poetic license — you get a hint of Italy’s new governing order. The prime minister is lawyer Giuseppe Conte, a political neophyte who seems like little more than a malleable man chosen by two youthful and ambitious politicians eager not to let the other hold the top office or possess undue leverage over its occupant.

Conte is the Latin Pence in which the composite Trump is Luigi Di Maio, who heads the Italian-lives-matter Five Star Movement, and Matteo Salvini, the bearded chief of the Northern League, resurrected in part on an anti-EU, anti-immigrant platform dedicated to the belief politics should come ahead of markets and illegal immigrants, whom he seeks to expel by the hundreds of thousands. The double-Trumps, dapper Di Maio and trucker boss Salvini, spent three months fighting and making up before finally agreeing to work together even though they’re not much alike.

This tandem will one-up Conte, since they’ll run two of the most powerful government ministries, Di Maio in charge of labor and economic development (he seeks a national flat tax), Salvini atop the interior ministry, which governs police and all domestic security, including helping to shape immigration policy.

Italy’s new Prime Minister Giuseppe Conte has his work cut out for him.

Notably, two vital economic positions, the finance ministry and the European affairs ministry, went to men in their 70s and 80s, Giovanni Tria in finance and Paolo Savona, no friend of the euro, running European affairs. Savona caused the collapse of Conte’s first government effort when President Sergio Mattarella vetoed him as finance minister, fearing market repercussions. Kicked out the front door, Savona was invited to climb in through the window.

The presence of these veterans made it clear both that Di Maio and Salvini sought cranky grandfathers, not mavericks in their own mold, to deal with Europe and the world.

Just what sort of a role lawyer and professor Conte can carve out for himself alongside this people-power duo is unclear. He wants to slash what he says are hundreds of needless laws, a red tape reduction all Italians would likely appreciate. Yet getting them to applaud a streamlined legal system is one thing, inducing them to follow the letter of those on the books quite another. Italians see shortcuts as a form of resourcefulness, something populist leadership is unlikely to change.

Nor is it clear that Di Maio and Salvini, bitter rivals on the campaign trail, can quell lingering infighting. Trump is a case in point. While as boastful as ever, skeptics within his own scrambled party have at times stood in his way. Moreover, he ran for a party he still doesn’t particularly like.

In that vein, the Five Star Movement and the Northern League are anything but a perfect match. One grew from Internet populism and focused on overhauling the old school political order. The other has a long history of working class antagonism toward Rome, to the point of once advocating northern secession. Five Star seeks to burn down the existing political house and build a new one in which traditional politicians are replaced by web-chosen citizen advocates. The League has openly xenophobic if not fascist leanings and would take the house as it is so long as it is run by hardcore rules.

Politically, it’s more of an arranged marriage than one made in heaven, since neither party can govern alone and alternatives to the existing deal are few.

Di Maio’s bond with the burly Salvini is tense. Until a few months ago, the Five Star Movement had vowed not to take on partners. The League’s Salvini, in turn, was an ally of Silvio Berlusconi, vowing to stick with him (he didn’t).

Both sides now speak of “a government for change,” though Italians — their voting tantrums aside —have never been a people prone to massive overhauls — aside from tax cuts and additional welfare spending. More precisely, they shy away from legislative efforts to disturb the continuum of highly individualized, “we’ll figure it out ourselves” lives that hinge on resourcefulness and showing up the established order. Ironically, there’s no assurance populists — better said, the anti-establishment that become the establishment — will clear a cultural hurdle in which appearing to conform to change is an art form.

Diehard change — new rules, new realities, and repression if necessary — and well-intentioned promises of political change — radicals who pledge all but fall short — cannot be compared. Since Benito Mussolini’s haphazard imposition of fascism, few pledges have panned out.

The Italian Communist Party rose to the brink of power in 1976, but soon lost its appeal, undone in part by terrorism. In the early 1990s, both the Christian Democratic and Socialist parties collapsed after a remarkable raft of graft and briber scandals. That fiasco produced Italy’s last carnival barker, Berlusconi, a charismatic tycoon whose success greased Trump’s early wheels. Berlusconi’s first government, in 1994, lasted less than a year, undone by legal woes that led to the defection of his key ally, the Northern League’s Umberto Bossi. In the 25 years since, Bossi has been convicted of embezzling public funds and Berlusconi, the ultimate survivor, legally raked over the coals too many times to count. Their fate may or may not be an admonishment to the new kids on the block.

Di Maio and Salvini, loudmouths both, insist all has changed, or will. Salvini has dissolved his “bud” relationship with Berlusconi, while Di Maio, tempted by power, has pulled the Five Star Movement away from its go-it-alone stance. Berlusconi himself will again be eligible to hold public office beginning in 2019, so he cannot be counted out, particularly in Italy’s south.

All know Italy is a country in deep, dark debt with high unemployment. The Five Star Movement’s eagerness to revamp recent pension reform, while popular, will, if passed, further burden the state stretched well past its limits. The League’s wish to expel illegals doesn’t bode well for a workforce that depends on outsiders, legal and otherwise, to haul its garbage – and make new Italians, since white Italians are increasingly reluctant to procreate. The country is old and getting older.

As for the European Union project, Salvini can’t stop loathing it — since it was he who wanted Savona in the finance role before backing down. Savona has accused Germany of attempting to subjugate Europe, using the EU, and public debt (witness Greece), as a tool. Now, Savona and Finance Minister Tria are Italy’s chief EU intermediaries. To Salvini’s electorate, Italy is a sort of #me2 rape victim whose time has come to talk back to Harvey Weinstein, aka Berlin.

Conte will be stuck with all this and more, his elbowroom limited by the ambitions of those who plucked him from nowhere. Unlike the semi-irrelevant Pence, he’s not an ideologue. Nor has he ever run for elective office. In fact, his demeanor is all but apolitical, again leaving ample space for the room’s two elephants to hoof it through the legislative landscape.

But it won’t be a cakewalk. There’s no assurance a rightist, voter-empowered Italy will succeed in carrying out coherent changes. A trained bureaucracy tends to stick with what it knows, at least in the short term. Thinking the ruling odd couple will go months without a spat is unrealistic. Too great are its ambitions, and too many within its ranks and outside it ready at a moment’s notice to denounce failures when they come, and they will.