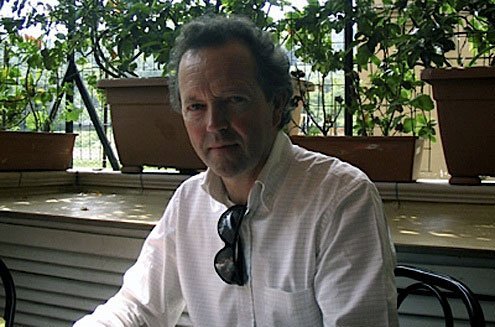 Ever hear the one about the Irishman who quit his job and just up and left Dublin one day for Italy and arrived in Rome without speaking a single word of Italian?

It’s no joke, it’s the true story of Paddy Agnew, a Rome-based journalist for the Irish Times and author of the new book, “Forza Italia — A Journey In Search of Italy and Its Football.”

Tired of life in dreary and cold Ireland, Agnew walked away from the security of a fulltime job as a sports editor of a local newspaper, packed his bags and along with his future wife Dympna set off for Italy.

When they arrived in late 1985, they couldn’t understand the language or culture, and it didn’t take them long to develop doubts about their Italian renaissance. The couple couldn’t find a flat, had no money, no friends, and quickly discovered that the day-to-day efficiency of Dublin didn’t exist in Italy — cashing an Irish income tax rebate check at the local bank took six weeks.

Eventually they adjusted to the rhythm of Italian life, mastered the language, raised a daughter, and found la dolce vita and professional success. Agnew freelanced for several years before becoming Vatican correspondent for the Irish Times, a position he holds to this day.

Aside from being a “Northern Prod” who covers the hallowed Vatican beat, Agnew is also an expert on Italian football. He’s served as an English-language commentator on Serie A matches for state broadcaster RAI for the past 15 years and has covered Italian football for a slew of other news organizations.

Agnew’s Italian adventure is a fascinating tale, one he re-tells with humor and charm in “Forza Italia.” Though football is the book’s premise, it reads more like Peter Mayle’s “A Year in Provence,” intertwining stories of Maradona and Juventus with his own personal reflections on Italian life and society.

Thoughtful and poignant, “Forza Italia” is Agnew’s personal survey of a country where football rivals Catholicism as the main faith, told from the unique perspective of an adopted Roman.

Agnew chatted with John F. Molinaro. These are excerpts from their conversation.

You dedicate an entire chapter to last season’s Genoa-Venezia match fixing scandal in Serie B and point out that the investigation that brought it to light “owed nothing to the vigilance of the football authorities and everything to do with the professionalism of two Genoa-based investigating magistrates.” What do you make of the current investigation into Juventus, which came about in the same way?

There is a huge similarity between the Genoa case and the way the current Juventus scandal has broken. From one point of view, this is only normal. For a start, magistrates have the power to tap phones, search buildings and offices, and check bank accounts — something football federation investigators and disciplinary commissions lack. Yet, the reality is, and I point this out in the book, that Luciano Moggi and Antonio Giraudo [of Juventus] have been at the center of intense speculation for years vis-a-vis their modus operandi. How come the federation did nothing about them? Worse still, how come senior federation officials such as [Innocenzo] Mazzini appear, via the phone taps, to have been hand in glove with Moggi and his match-fixing schemes? This is far bigger than the Genoa case. One suspects that this is the most serious scandal since the 1980 betting scandal. First, we’re not talking about match-fixing, but championship-fixing, rigging an entire season. Second, the scandal appears to involve just about everyone: big clubs, refs, federation officials, TV commentators, and journalists. This one seems destined to run and run.

How did you come to write “Forza Italia?”

I had in mind for a long time to write a book, just on the basis of living in Italy for so long. Random House rang me up one day and asked if I would be interested in writing one. They wanted a book that dealt with the history of Italian football, and would run through Italian football today — the big clubs, the fans, the national team — in a very predictable format. But I wanted to write something much more personal… My idea was to sum up my experiences and my opinion about the way things are in Italy, about the nature of society and the extent to which the nature of that society is reflected in its football.

Why did you and your wife move to Italy?

When we left [Dublin] we were in black-and-white, Catholic Church dominated, recession-ridden, pre-Celtic Tiger Ireland. It was a different Ireland than it is today. We just wanted to get out. I wanted to go to France, she wanted to go to Spain, so we compromised and went to Italy (laughs). I had an idea already that it would work out because I could see two immediate sources of work: football and the Vatican. The era of Berlusconi has made Italian politics, for better or worse, very interesting, and its become another valuable news source.

How hard was it to adjust to Italian life?

My first year was major culture shock in the sense that I had been the sports editor for a Sunday paper in Dublin. I was very busy, the phone was ringing all the time — I was in my own world and I knew where I was. So to move to somewhere like Italy where all of a sudden the phone wasn’t ringing — I didn’t even have a phone to ring — was hard. I went from a staff job with security to nothing.

I didn’t expect people in Rome to be as difficult to deal with in terms of looking for a flat or at the bank or buying a car. All of that stuff drove me mad at the beginning. There was a market in a piazza where we first lived and I remember going into the bakery to get some bread and I took my place in the queue. But this is Italy and nobody waits in line, they just cut in front of you, and everybody always jumped ahead of me and it would always take me half an hour to get my bread. After a few weeks I started using my height, weight, and elbows to fight my way to the front (laughs).

You write that football is “encoded in the DNA” of Italians. Why does it matter so much?

Historically, the tradition of spectacle has always been important in Italy. It’s a culture where what goes on in public really matters, public perception matters — the idea of bella figura. Spectacle also matters, and by extension football matters because it is a great spectacle. The other thing about football is that it’s a meritocracy. In Italy, a lot of people instinctively feel [suspicious] of a guy who gets named director of the local bank or the local hospital because they don’t know if he has the skills to do it or if he landed the job through raccomandazione.

But in football, if someone gets picked to play in goal for Juventus and the he starts letting in a lot of goals, you can quickly see he doesn’t have the skill for the job. You can’t hide [any shortcomings] on the football pitch. Football offers an element of clarity to it that everyday life in Italy doesn’t.

What are Italy’s chances of winning the World Cup in Germany?

I think they’re very good. They have a difficult group — the U.S., Ghana and Czech Republic are not easy sides. The U.S. is a very good team, well prepared and very well coached. [American coach] Bruce Arena knows his football. Ghana is well-organized and they have some useful players — Michael Essien [of Chelsea] and [Udinese’s] Sulley Muntari. Ghana will be tough and Italy could even end up playing Brazil in the second round. Those are all the problems.

The plus factor for Italy is Marcello Lippi is an excellent coach. From day one, he opted to put together a side of players who would run for one another, work for another, and who believe in the common cause. He values the overall team mentality, and that’s more important in a tournament like this than the sheer technical skills of one or two brilliant individual players.

Within days of the match, the Genoa victory celebrations had turned sour. Newspaper reports were suggesting that the game was “suspect.” Media suspicion had been aroused when, on the Tuesday following the match, Venezia’s general manager, Giuseppe Pagliara, had been stopped at a “routine” police checkpoint, just minutes after he drove his KIA car out of the headquarters of the toy manufacturing company, Giochi Preziosi, owned by the Genoa president and based at Colgiate, near Milan. In the car, police found a brief case containing €250,000. Pagliara was unable to explain how he had come by the money or for what purpose it was intended. Subsequently, he explained that the money was part-payment for the transfer to Genoa of Venezia defender Ruben Maldonaldo.

By Friday, 17 June, less than one week after the match, media reports claimed that the Procura di Genova was investigating into possible “sporting fraud” carried out by the Genoa club and by President Preziosi. One week later, the sports papers were carrying the transcript of various conversations, including one in which Matteo Preziosi, son of Enrico, invited Pagliara to drop round to the Giochi Preziosi headquarters to “settle things.”

Media speculation then suggested that another of the Serie A promotion candidates, Torino, might be involved. It was reported that the former Torino player and sports director, Roberto Cravero (rumored to be heading for a job with Genoa), had alerted Genoa to the fact that Torino had been in contact with Venezia with a view to encouraging them to give it their all against Genoa. If media reports were to be believed,

Venezia were much in demand. Genoa were busy persuading them to lose, while Torino were encouraging them to win.

Clearly, yet another nasty Italian-style football scandal was brewing. Not for the first time, the initiation of this particular investigation owed nothing to the vigilance (or lack of) of the football authorities and everything to the professionalism of two Genoa-based investigating magistrates.

In April 2005, state attorneys, Alberto Lari and Giovanni Arena, were investigating a credit card fraud, which had already led to the arrest of three people in France, when their authorized police taps accidentally led them into football. One of those involved in the credit card fraud was also a heavy gambler, of the sort who operates in the world of clandestine betting. The two magistrates quickly realized that some skullduggery was afoot in relation to the Genoa versus Venezia game and were given authorization to tap the phones of both Genoa and Venezia officials as well as to place bugs in the Novotel Hotel, Genoa, where the Venezia team stayed prior to the game. It was the content of these phone taps that prompted the magistrates to open an investigation with a view to charging various Genoa and Venezia officials with ‘sporting fraud’.

Within two weeks of the match, General Italo Pappa, head of FIGC’s investigations office, had paid a visit to the two young magistrates in Genoa. He traveled back to Rome with a weighty dossier, containing transcripts of the incriminating conversations.

While the State judicial processes would inevitably be lengthy, the sports disciplinary body could not afford to wait. After all, the new Serie A season was only two months away.

About the Author: John Molinaro