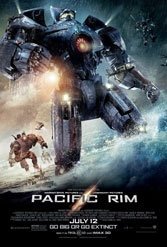 Though such a premise is the sci-fi/gaming norm, Del Toro’s is literally allergic to suspense, relying start-to-finish on the Herculean but hackneyed fight between “bad” creatures — known as Kaiju — and swashbuckling “good” mega-machines — called Jaegers. Their 3D battles are text messages of a sort; action vignettes as surrogates for any kind human engagement.

In the near future a rift opens in the Pacific and out come the Godzilla-like Kaiju, gory terrorists of a threatened tomorrow. Brothers Raleigh and Yancy (Charlie Hunnam and Diego Klattenhoff) are members of an Iron Man elite corps deployed to defeat the toothy lizards. When Yancy dies in combat, Raleigh grieves his way into disgrace, only to be re-recruited, setting the stage for a climactic Hong Kong beat-up, this time with a pretty Chinese woman named Mako (Rinko Kikuchi) as his symbiotic partner (the robots depend on Spock-like mind-melding between their pilots, a so-called “neural bridge.”).

Del Toro clearly leans into the effects, hoping they’ll make up for the dubious rest. But give scorched earth clichés an inch and they eventually take a movie mile. There’s a stoic commanding officer (Idris Elba), testosterone rivalry, the fragile but tough Mako, ruined cities in the 9/11 mold and, of course, a raft of amniotic sea creatures — magnificently conceived — that snarl and bash at will. Two quirky scientists are tossed in for comic relief.

Del Toro has always shown respect for legend and all that lurks in its draperies, often adding satanic ingredients. This, however, is movie-making by bar code. What Del Toro called a “super-brooding, super-dark, cynical summer movie” is none of those things because it defeats empathy.